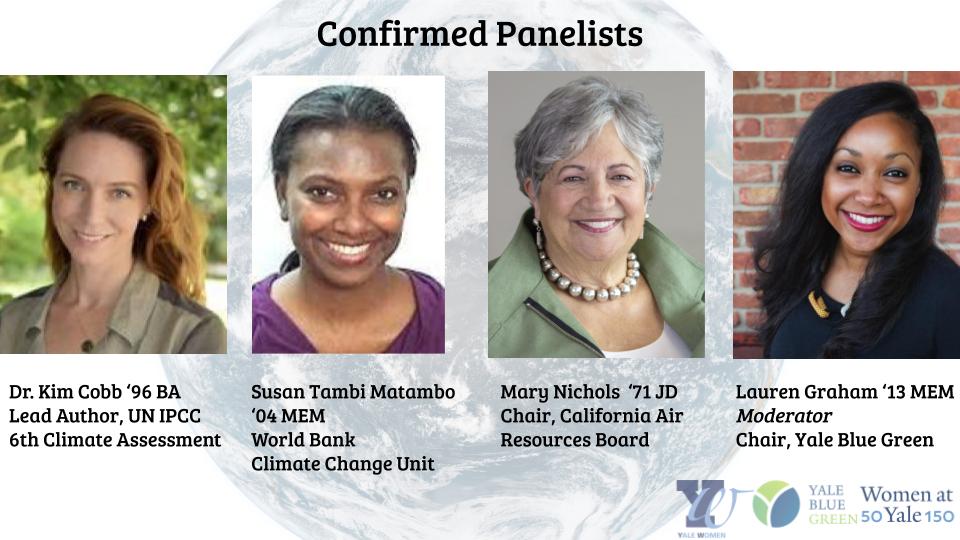 With over 100 peer-reviewed publications in major journals, Dr. Cobb is also honored to be lead author for the UN Intergovernmental Panel on Climate Change (UNIPCC) Sixth Assessment Report, coming in 2022. Her research incorporates observations of past and present climate, particularly in corals and cave stalagmites, to advance our understanding of future climate change impacts. After studying biology and geology at Yale University, graduating in 1996, she completed her Ph.D. in oceanography from the Scripps Institute of Oceanography in 2002. She spent two years as a post doc at Caltech in the Department of Geological and Planetary Sciences before joining the faculty at Georgia Tech in 2004. “The Indiana Jones of climate science,” Kim has sailed on six oceanographic cruises and led five caving expeditions to the rainforests of Borneo in support of her research. Dr. Cobb has received numerous awards for her research, most notably a NSF CAREER Award in 2007, and a Presidential Early Career Award for Scientists and Engineers in 2008. As a mother of four, Kim is a strong advocate for women in science.

Lauded as “the most influential environmental regulator in history,” in Yale Alumni Magazine’s January/February 2020 issue (“The Climate in California”), Mary Nichols is the Chair of The California Air Resources Board. In her half century career as an environmental lawyer, she has played a key role in California, leading the fight to reduce carbon pollution. She has also led the Board in crafting California’s internationally recognized climate action plan.

When not working for the State of California, Mary was a senior staff attorney for the Natural Resources Defense Council; Assistant Administrator for EPA’s Office of Air and Regulation, in the administration of President William Jefferson Clinton; and headed the Institute of Environment and Sustainability at UCLA.

Susan Tambi Matambo currently works in the Climate Change Unit of the World Bank Group as a Senior Specialist working to integrate climate change into the World Bank Group’s engagement with countries across the globe. Tambi has worked in various capacities with the World Bank Group for the past 15 years. She has also worked as the International Policy Coordinator for the US Climate Action Network(USCAN) in Washington DC and the Wildlife Conservation Society (WCS) in her home country Zambia.

She holds a Bachelor’s degree in biological sciences from the University of Zambia and a Master’s degree in environmental management from the Yale School of Forestry and Environmental Studies. Her most recent academic focus was on global change science and policy as it relates to the influence of global institutions on domestic environmental policy. Tambi has written on international climate policy and climate change adaptation, has extensive experience working on environmental issues in Africa, has lived in Southeast Asia, and currently resides in the United States.

Lauren Graham ’13 MEM is a Senior Associate at The Cadmus Group, an environmental consulting firm, where she works on the environmental portfolios of nonprofit, NGO, and philanthropic clients. She is also the founder and CEO of Velvet Frame, a social change strategy and communications agency based in New York. Lauren Graham works with nonprofits and social enterprises across the environment and social impact spectrum on their capacity-building and change management challenges using an ecosystems approach. Her background is rooted in environment, sustainability, and creative media for public engagement. In addition to being a proud Yalie, she is an alum of Stanford University and the University of Pennsylvania School of Social Policy and Practice. Since 2014, Lauren Graham has chaired Yale Blue Green, an environment and sustainability alum interest group. She also serves on the governing council of YaleWomen.

Phoebe Shackeroff Reese ‘98 BA is co-chair of Climate Reality: Pittsburgh & Southwestern PA Chapter. After her graduation from Yale, she earned an MFA from the University of Southern California School of Cinematic Arts. Phoebe Reese previously served on the YaleWomen Governing Council where she chaired the Programming Committee.

Akosua Barthwell Evans ‘90 JD is an attorney and a strategic organizational innovator whose career spans leadership in management consulting, asset management and securities/corporate law. She is the Founder and Chief Executive Officer of the Detroit-based The Barthwell Group, a boutique, multi-dimensional management consulting firm that provides strategic planning, diversity training, assessments and other services to Fortune 500 corporations, institutions of higher education and the military. Dr. Evans brings to the corporate boardroom a three-decade track record helping leaders of Fortune 500 companies, the military and major universities look to the future, as she guides them in tackling new market opportunities and enhancing their organizations’ competitive advantages in changing global environments.

In addition to her JD degree from Yale Law School,   Dr. Evans holds a PhD and MPhil (both in Political Science) from Columbia University; she received her AB (in Government) from Barnard College. She previously served a 3-year term on the YAA Board of Governors (2016-19).