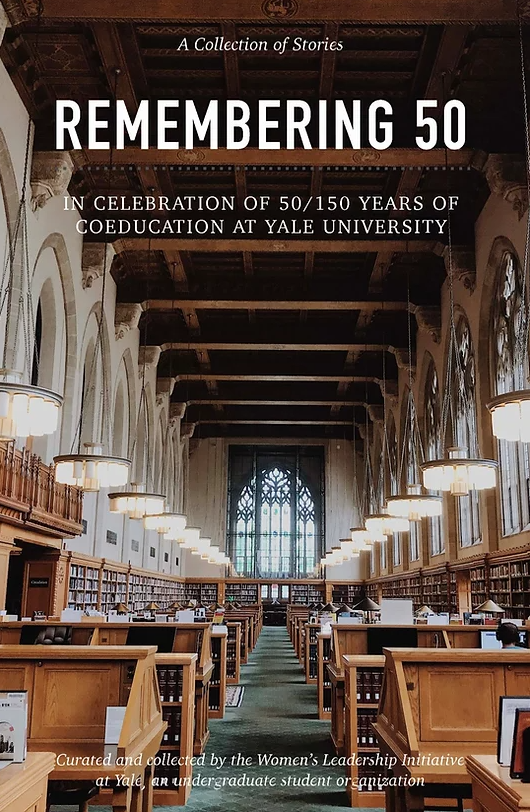 “Remembering 50” is a striking, curated collection of first-hand, personal and profound recollections by Yale College alums. It unfolds chronologically, starting with the first women who were admitted to Yale College in September 1969 as undergraduates in the class of ’71 through the most recent 2020 graduate; it also includes the stories of alums from various Yale professional schools over the last 50 years.

In addition to the detailed, “behind-the-scenes” narratives themselves, the book is remarkable for its whirlwind, 11-month journey to publication from its conception in late September 2019 by two rising juniors, Ananya Kachru ’22 and Jen Huang ’22. Ananya and Jen are co-presidents of the board of the Women’s Leadership Initiative at Yale (WLI), an undergraduate organization founded in 2006 that seeks to empower future womxn leaders by providing professional and personal development opportunities, and creating a campus culture that emphasizes and promotes womxn’s leadership at Yale and beyond.

On September 10, “Remembering 50” was formally launched at a 90-minute online event attended by 200 online participants. It featured 17 of the book’s 45 contributors reading excerpts from their narratives as well as brief video appearances from additional contributors, who spoke about what “Remembering 50” means to them.  The launch also gave participants the backstory of the genesis of the book—and a glimpse at how its content will be expanded into other media in the future.

The making of “Remembering 50.” The idea of finding a meaningful way to understand more about the “trailblazing,” resilient women who overcame myriad obstacles in paving the path to full coeducation at Yale began as a conversation between Ananya and Jen during a weekend trip to New York City in late September 2019. Earlier that month, they had attended the “50 Fest,” an evening hosted by Yale College on the Old Campus so undergraduates could meet the women from the first classes (’71, ’72, ’73) who were at Yale to celebrate the anniversary of the 50th year of Yale undergraduate coeducation.

Ananya and Jen had been disappointed that the event, which featured rather loud music, had not been sufficiently conducive to conversation. The two undergraduates agreed that they wanted more of an opportunity to understand how Yale both evolved over time and, in some ways, remained the same; how the university had been impacted by social and cultural events; and how all of this was reflected in the first women undergraduates’ experiences.

Paradoxically, then, the “disappointment” of “50 Fest” was a catalyst for Ananya, Jen, and Avery Arena, the previous WLI president, to brainstorm about other ways to commemorate the 50th anniversary and better understand the women who came to Yale before them. They arrived at the exciting but challenging idea of producing a book “which would have lasting impact.”

They decided to aim for two stories per undergraduate class for 50 years (while there were ultimately some gaps, these were beautifully filled by stories from graduates of professional schools). The process that unfolded included emailing all alum organizations, asking interested alums to submit a “story pitch” about their experiences at Yale and selecting which pitches would be invited for elaboration into longer stories. Submissions were edited twice. Then began the complex navigation through the legal process, involving the Office of Risk Management, the Office of the General Counsel, and the Dean’s office.

How could an organization at Yale publish and distribute a book? WLI applied for, and received, a grant for monetary support, and found a great independent publisher who guided them through the publication process. Jen and Ananya also attributed their success to a strong support network of women at Yale, the energy and enthusiasm of the book’s contributors, and the “awesome team and family at the WLI,” in particular the past president Avery, to see the project through to the delivery of five large boxes of books at Jen’s house in early September.

The story continues. The book’s publication marks a milestone—but there’s much more to the journey. During the launch party, WLI Communications Director Julia Zheng introduced several projects that will expand on the book. These include a podcast series, “The Womxn of Yale” which features conversations with the book’s contributors and WLI board members; there are two episodes currently accessible through the WLI website to play on Spotify or Apple TV, with more to come.

A documentary “companion” film based on the anthology is now in the planning stages, in collaboration with film director/ producer Jodi Binstock (“Call Waiting”) and award-winning pianist/composer Amy Rubin, Yale School of Music ’76, who is also one of the book’s contributors. Speaking during the launch, Jodi explained that a documentary film is a great way to “get the word out there,” and is especially welcome during this time of pandemic shutdowns and isolation.

Read more about and buy the book on the WLI website here.

(They will deliver anywhere in the U.S.; international shipping possible upon request)