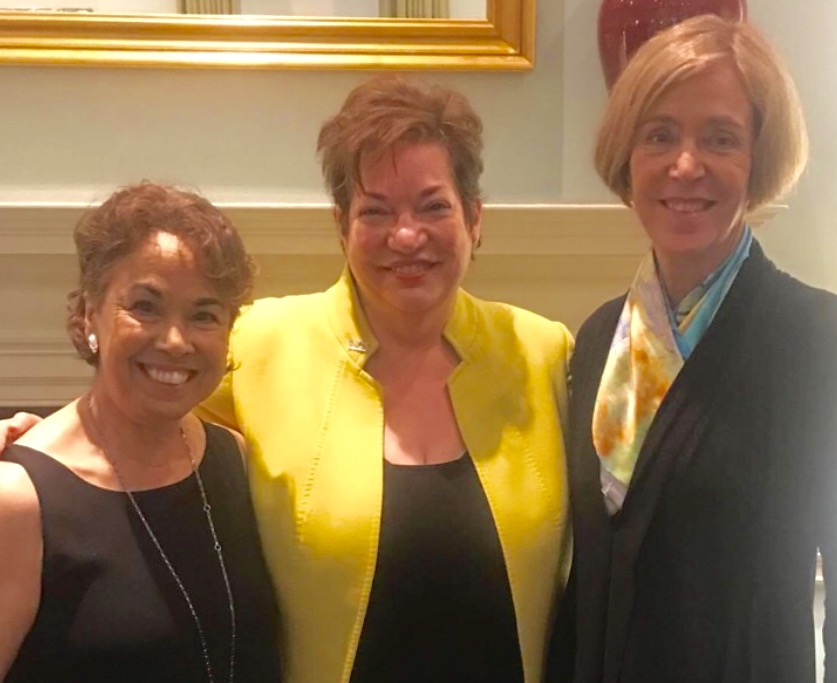 More women are entering the political arena, and the Women’s Campaign School at Yale (WCSYale) is working to prepare them for success. WCSYale is a non-partisan, issue-neutral, non-profit organization that provides training to aspiring women candidates for political office and campaign management. Women in the program come from a variety of backgrounds and party affiliations; they are not all Caucasian, and they are not all Democrats. WCSYale had a class of eighty women in its June 2019 summer program, including almost 50% women of color and a record-breaking number of Republican students. The percentage of Republicans attending WCSYale has increased so much that an exciting new element, entitled “The Future of Women in the GOP,” was added to this year’s program.

We welcomed our twenty-fifth class to Yale Law School this year, and we are so grateful for the unwavering support of Yale University. In 1994, pioneer women at Yale joined our founder, Andree Aelion Brooks, to create the Women’s Campaign School at Yale. Linda Lorimer, then Vice President at Yale, and Kate Stith, Lafayette S. Foster Professor of Law at Yale Law School, were the key players in making our School a reality. Past Yale Law School Deans, and the current Dean, Heather Gerken, have been key supporters of WCSYale.

Yale’s dedication to helping create a political pipeline for women continues to be visible in Dr. Eve Hart Rice’s ’73 and Marta Moret’s ’84 MPH exceptional contributions to WCSYale. Eight years ago, Dr. Rice founded the Yale Women in Government fellowship. Each year, eight Yale undergraduate women have the opportunity to attend the School, funded by Dr. Rice, before they leave for their public policy summer internships. In addition, Marta Moret, the First Lady of Yale, serves on the WCSYale Board of Directors and will soon take on the leadership role of WCSYale Board President. Marta’s passion for WCSYale’s mission has made our School extraordinary.

Of course, the School’s strong partnership with YaleWomen has strengthened WCSYale’s connection to Yale alums. WCSYale has spoken at the majority of YaleWomen’s chapters, and YaleWomen NYC chapter head Joan O’Meara Winant ‘73 made it possible for the WCSYale to speak at Oxford University, forging an ongoing international bond.

The increase in women’s political engagement is not simply a domestic phenomenon. While WCSYale students come from all regions of the United States, they also join us from countries across the globe. This year, our American students came from twenty-five different states. Our international students hailed from countries as widespread as Mongolia, Australia, Panama, Zimbabwe, Mexico, Bosnia and Herzegovina, Belarus, and the United Kingdom.

WCSYale also does more to train women than provide its signature five-day intensive annually at Yale Law School. The School provides one-day training sessions across the country throughout the year. These are critical for women who are still considering whether or not to run and who need more insight into what it would truly take to do so. These women are our future candidates. The five-day program’s students are our present.

To learn more about the work of the WCSYale, please visit the website at www.WCSYale.org, or connect with Patricia Russo, Executive Director, [email protected]