On June 6 at 3pm Central, YaleWomen Houston welcomes Harris County Clerk Teneshia Hudspeth for a non-partisan virtual conversation on her journey. Clerk Hudspeth is a graduate of The Women’s Campaign School at Yale, recently renamed The Campaign School at Yale (TCSY). A non-partisan and issue-neutral organization, sponsored by the Yale Law School, TCSY empowers individuals to lead through politics. Led by Patti Russo, the organization has supported the political careers of over 4,000 women over the past two and a half decades. 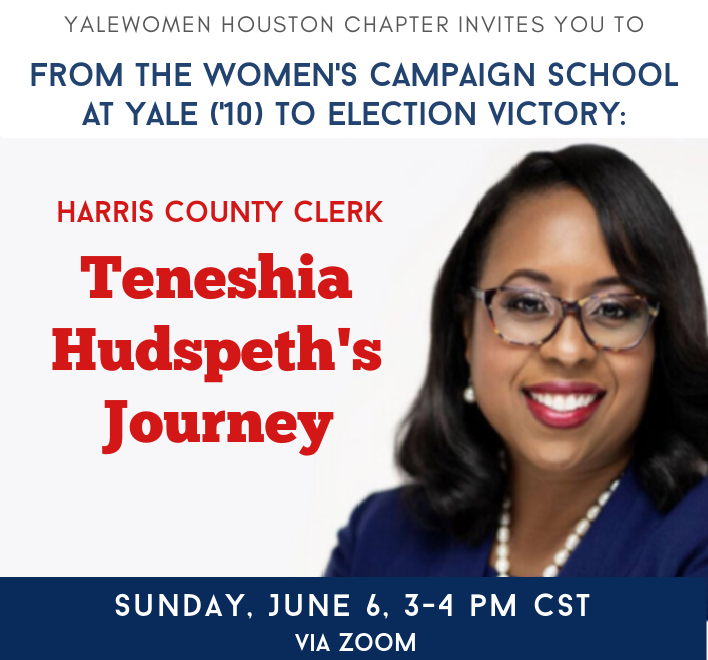 Teneshia Hudspeth is County Clerk of the third-largest county in the nation and the largest county in the State of Texas. Harris County has a population of more than 4.7 million. She is also the first African-American woman to serve in this role. Clerk Hudspeth is a native of Austin, Texas, but has called Houston home for more than 20 years. She and her husband Samson Babalola are the happy parents of Josiah.

Clerk Hudspeth has been with the County Clerk’s office for more than 15 years and has served under four County Clerks. She began her career as the Public Affairs Administrative Assistant, was promoted to Voter Outreach Coordinator and Public Information Officer, eventually becoming the Administrator of Communications and Voter Outreach. In January 2020, she was appointed Chief Deputy, responsible for office operations and in less than a year was elected Harris County Clerk.

Regardless of one’s political leanings, civic engagement for us as a society is more important than ever. Please join us for this intriguing event.