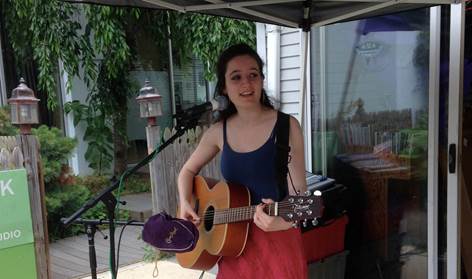 Sofia Campoamor is a junior in Morse College.  She is a music major and a member of Mixed Company.  She is also, notably, breaking barriers as the first female Whiffenpoof.

Whim ‘n Rhythm and the Whiffenpoofs jointly announced that they would consider singers of all genders to be members.  Why the change now?

It’s important to understand the statement the two groups are making.  It isn’t about being co-ed, it’s about not wanting gender to define the groups.  The groups looked at what was important to them about their music and not the labels that defined them and their singing.

Why the Whiffenpoofs rather than Whim ‘n Rhythm?

I auditioned for both.  For me, personally, I was interested in the Whiff’s music and taking the year off to concentrate on the group.  I remember seeing the Whiffenpoofs when I was a first year in high school. I thought, wow, it would be so cool if I could do that, but I guess I can’t because I am not a guy.  I want things to look different.

How do you feel about being the only woman in the group next year?

It is the reality of my next year.  Happily, I am going with some of my closest friends from Mixed Company.  Not everyone might be comfortable with that, but I am.  Still, it will be a group mostly comprised of men, which means I will still have a gendered experience.  I hope that it will be the beginning of a conversation rather than the end.

How will this impact the repertoire of the Whiffs going forward?

I don’t anticipate it impacting the repertoire at all.  I was considered a tenor.  You want a range of pitches in an arrangement, and tenor parts can be quite high.

You are a music major.  How has that impacted your a capella experience?

I really enjoyed being the only music major in Mixed Company.  It’s good to be with people who are not in music all the time.  Last semester, I took a class on arranging voices, and I now have more tools and perspectives.  I like to think about music all the time – in school and extracurricularly.  My major let me make an album for my senior project with original songs as part of my degree.  I am thinking about potentially using one of my original songs in the repertoire next year.

Do you have a particular influencer you admire?

I do – Sara Bareilles, a singer-songwriter.  She writes music and has an incredible voice.  She makes everything true to herself.  In her Broadway show Waitress, she had an all-female creative team.

How has Yale been for you in regards to gender?

I’ve never really felt like my gender has been an obstacle or put me in difficult situations.  There have been classes I have been in where there are very few women, particularly in composition.  However, my primary professor in composition is a woman, Kathryn Alexander, which has been great.  Even when most of the people in the room are men, I have never seen it come up in a way that has been harmful.  But it can make you feel like being a little more watchful.  It puts you on edge.

I think gender is still useful in connecting with others and as an identity but not to define a singing group.  The women in my life are extremely important to me, as is being able to share and talk about things that are important to me with other women.  Most of the world is still a place where people have a different experience based on their gender.  It can be useful to look at things with that lens so we can address things when gender becomes an obstacle.  I’m trying to learn what that looks like in the music industry.  When you look at instrumentalists in bands, you have your female front woman singing but a whole lot of guys backing her up.  And producing and engineering are jobs still traditionally thought of as male.  There is a lot to be worked on.

What do you hope to do after you graduate?

I really love writing songs and singing them.  I’d like to be doing that as much as possible.  I want to write as many good songs as I can and keep finding people to sing them and produce them.  I’m still working out whether I want to sing or write.  Right now, I plan on doing both, perhaps focusing on each at different times.  I would be happy just doing the writing but would love to keep the two together if possible.

What would you tell others at this point in your life about how you find courage?

Throughout my life, the best things I’ve done, I did not know to be scared of.  I didn’t know what it would be like, so I thought, I’m just going to do it.  That’s something I’ve noticed again and again, and it’s been really wonderful.

Where do you find inspiration for what you do?

It depends.  If I’m sitting at an instrument, I improvise and then pursue.  Or if I have a lyrical idea, I attach it to music pretty quickly.  I may take a saying or construct a new idea around familiar songs.  I try to write songs that I want to hear, songs that don’t exist yet.  I grab something on my mind and try to build around it.