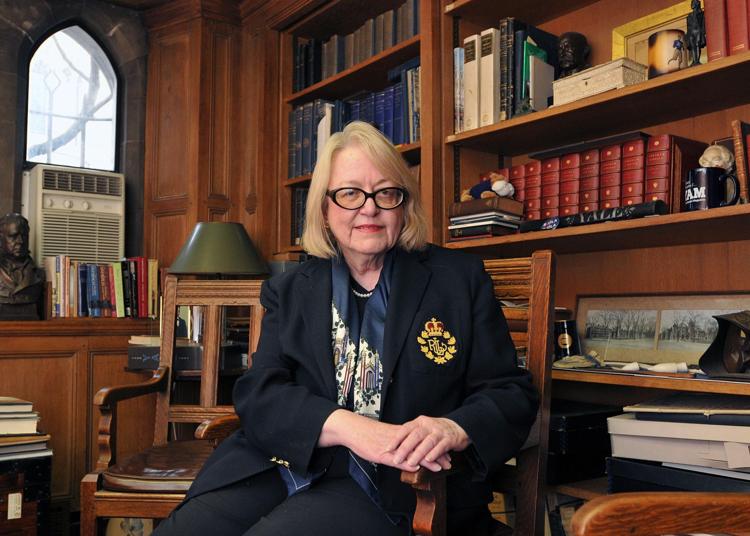 The AYA Board of Governors has the responsibility for selecting Yale Medalists, with over 300 individuals so honored since the award began in 1952. President Peter Salovey ’86 PhD and YAA Board of Governors Chair Jerry Henry ’80 MDiv presided over the celebration honoring the five Medalists, of whom Judith Ann Schiff was one of two women. This year, this special event was held virtually—but no less memorably, with tributes, photos, videos, and Yale-themed music—on December 8, 2020.

“Judy is one of a kind. She brings Yale’s history to life. Her title is ‘archivist,’ but she is also a historian, teacher, guide, mentor, and friend. Judy loves Yale and its hometown—her hometown—New Haven.”

“Judy may be a national treasure. She is definitely a Connecticut treasure. Above all, she’s a Yale treasure: a modest, self-effacing scholar who is a dynamic asset to the University.”

“Her life, far beyond the confines of a career, has been one of extraordinary service to Yale and to its alumni.”

“The Yale Medal recognizes outstanding service to the University, and I can think of no one who has contributed more to venue. During your 60 years at Yale—60 years!—you have helped thousands of students with their research projects, senior essays, and dissertations. You’ve helped us all to gain a deeper understanding and appreciation of Yale’s history, with a special emphasis on the lives of African Americans and women. Who doesn’t look forward to your latest “Old Yale” column in the Yale Alumni Magazine? You’ve given so generously of your time and expertise to the New Haven community, especially in your role as the New Haven City historian. Your work has touched countless numbers of people, and your enthusiasm for that work is infectious and inspiring. ..

The Yale Medal was awarded to Judith by President Peter Salovey and YAA Board of Governors Chair Jerry Henry, with the following citation:

“You are the keeper of Yale’s history and traditions, a role you have embraced with charity and charm, making you a welcome and welcoming resource to all in a distinguished career that spans six decades. Serving as Yale’s chief research archivist and New Haven’s volunteer sitting historian, beloved “Old Yale” columnist, and a dedicated volunteer, you have made it your life’s work to share the history of Yale with others. Your dedication to sharing your research on women and diversity in the Yale-New Haven community has taken on special relevance this past year, as we celebrated the 50th anniversary of women in Yale College. A frequent speaker at alumni events, and a regular presence at any regional historical gathering, you have been rightfully described as one of those special people revered by colleagues, students, and alumni alike. For your impact on the university and on the lives of so many Yalies, the Yale Alumni Association honors you with our most prestigious award, the Yale medal.”

Speaking of relevance and Judith’s “Old Yale Column” in the Yale Alumni Magazine: Judith wrote five columns in 2020, all of which artfully and informatively juxtapose current and historical events: “When alumni got the vote”—when the Young Yale movement pushed for reforms in the 1870s, including the election of trustees by alumni (Jan/Feb); “When ‘weekending’ was the thing”—when mandatory Sunday Chapel was abolished and students of the roaring twenties discovered Manhattan” (Mar/April); “Remembrance of plagues past”—times when classes at Yale were interrupted by epidemics long before the arrival of COVID-19 (May/June); “The ad man who sold the war”—on Chester Bowles ’24S who pulled Americans together in a time of crisis (Jul/Aug); “Yale’s first global president”—Theodore Dwight Woolsey connected Yale to the world (Sept/Oct).

It would be a challenge to find a topic involving Yale or New Haven history which Judith has not researched and is not an expert. Her publications are far-ranging and always fascinating: from The Green Guide to Yale University and New Haven (Michelin Travel Publications, 2000), the chapter on “The Social History of New Haven (in Floyd Shumway and Richard Hegel’s edited volume, New Haven: An Illustrated History, Windsor Publications, 1981), to the introduction to a new edition of Stover at Yale (originally by Owen Johnson, Class of 1900). Curator, guardian, and overseer of Yale’s extensive document and photograph collection of famed aviator Charles Lindbergh, who she knew personally, she co-edited, with William Jovanovich, Charles Lindbergh’s Autobiography of Values (Harcourt Brace Jovanovich, 1978), selecting from almost 3000 pages of manuscript, and adding photos, maps, and a bibliography of Lindburgh’s publications from the Sterling Memorial Library.

As related in Judith’s lectures as well as her writing, history comes vividly to life. In an article for the Yale Alumni Magazine (March/April, 2012), Judith researched the connections between Yale and the Titanic. She discovered that six Yale men sailed on the Titanic’s ill-fated maiden voyage; four were rescued. In the article, Judith wrote that one of the survivors Karl Behr, a tennis star and 1906 graduate of Yale’s Sheffield Scientific School, had booked passage on the Titanic to return from a business trip to Paris. His trip was a pretext, however, for his real intention of pursuing his courtship of Helen Newsom, whose mother and stepfather, Richard Beckwith (Class of 1898) were against the relationship, and hoped to break it up by taking their daughter with them on a trip to Europe, returning on the Titanic. As destiny would have it, however, the Beckwiths and the two protagonists of this story made it into the second lifeboat, and less than a year later, Behr and Newsom were married (and then had four children).

One could say that Judith was born to be Yale’s and New Haven’s most accomplished and acclaimed historian. She grew up in New Haven, literally in the shadow of Yale, and graduated from Hillhouse High School. Yale College had not yet opened its doors to admitting women, so Judith attended Barnard College, one of the “Seven Sisters.” After earning her BA, she returned to New Haven in June, in 1959, with the intention of earning money toward her post-graduate education. In a video interview shown at the December 8 Medal Celebration, Judith said, “I had a friend who was working in the library and waiting for something to come up in her line in science, who told me about an opening here. I decided to explore it.” And the rest, as they say, is history. Judith accepted a job first as editorial assistant, and then in the Manuscripts and Archives department at the Sterling Memorial Library. She obtained a master’s degree in history from Columbia University in 1964, resumed her work at the library, and then completed a degree in library science at Southern Connecticut State College. She assumed her present position as Chief Research Archivist in 1971.

Judith has founded or co-founded a number of local and professional historical organizations, including New England Archivists, the Jewish Historical Society of Greater New Haven, and the Ethnic Heritage Center of New Haven. She serves on the board of the New Haven Museum, and the National Historic Landmark Grove Street Cemetery, about which—not surprisingly, she has written a number of articles. In addition to the Lindbergh collection for the Yale library, she has helped acquire the papers of Emily Dickinson. In recognition of her work on the history of women and diversity in the Yale-New Haven community, she received the Edward A. Bouchet Leadership award in Minority Graduate Education at Yale and the Edward Bouchet Legacy Award at Howard University. She was honored with an Ivy Award for contributing to “increased understanding and cooperation between Yale and the City of New Haven. On November 13, 2019, President Salovey and Linda K. Lorimer honored Judith as one of 30 Yale staff members to receive the Linda Lorimer award for distinguished service. Judith was cited for “her extraordinary commitment to discovering and sharing Yale’s history, (which has) engendered a deeper sense of community, advanced diversity, and disseminated knowledge of the university.”

In the video interview shown during the Yale Medal Celebration, Judith continued to explain her indefatigable life-long career researching and writing about Yale and New Haven history: “I just love the world of academia, where everyone makes their own special world, really from the top to the bottom. Everyone seems interesting, whether they mow the lawn, plant flowers, write out checks, or are historians or professors…The other thing is the approachability that even from the beginning, when I had a job where I thought no one would take much notice of me, it was easy to get to know professors and administrators. I came to know first-hand about the Yale “spirit” which we all talk about and try to define. I think it does exist, when people work together for a common cause, to make the town and University better, to make people better. If your work is not something you really enjoy, you have to keep looking—whether you’re an artist or a composer, or someone who just likes to read old papers, you have to find the thing you are passionate about. And I think it’s the sharing with other people which has meant so much to me.”