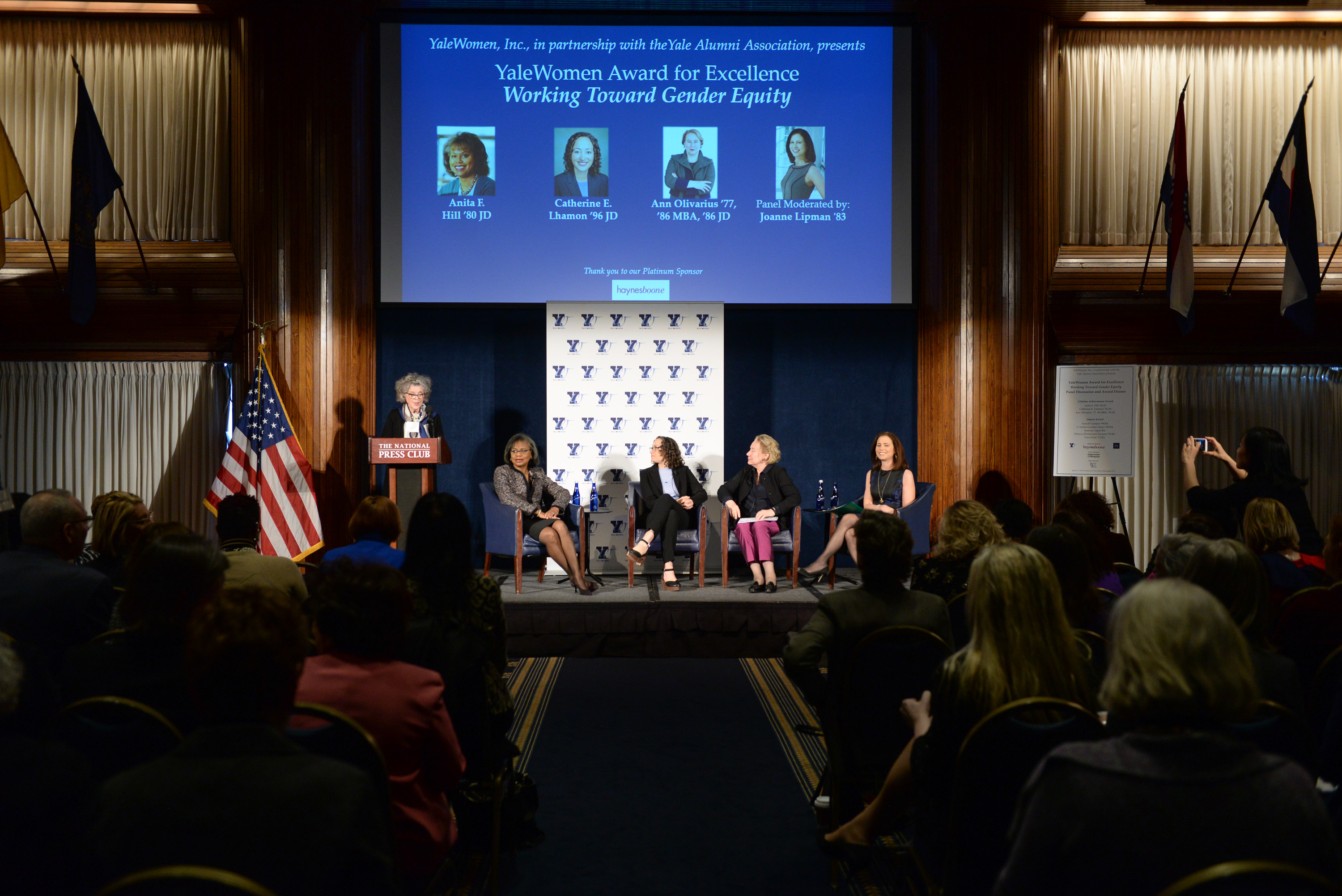 Below is an edited version of the panel discussion.

JL: How did you become a leader in the fight for gender equality and what role, if any, did Yale play in that?

AO: It’s not one moment that makes you a feminist, it’s a whole series of things that happen.  For me, I gradually started to see things through a different lens. When I got to Yale, I started to ask is there a caste system?  Is there sexual apartheid? I saw that a lot of women were having sex with professors, and consent wasn’t even in the parlance at the time. I wanted a central database for sexual offenses, and I thought that Yale would want to know how bad this problem was. Yale said no and forced us to file the suit. Alexander v. Yale became the landmark case that recognized for the first time that universities had an obligation to protect students from sexual harassment.

AH: It is true, it is not just one thing that happens. For me, I never even thought I wasn’t interested in gender equity. I grew up in rural Oklahoma and my mother had thirteen children. My mother told me at an early age, “I don't ever want you to ask a man for your livelihood.”

If you want to claim your own personal freedom and your own self-sufficiency, you will deal with gender issues.  I also had to deal with race. I came to understand that in order to be truly equal and free, I had to deal with both race and gender inequalities. Then, there is my personal story. When I found out I got into Yale, everyone was very happy and at that time, a neighbor said to me, “You are going to do great things for women.”  I could not tell whether that was a prediction or command, but it didn’t matter because I was moving into doing things for women. There were a lot of opportunities that came about that I took advantage of, it just came naturally because as a woman who wanted to live independently and self-sufficiently, I had to be paying attention to these issues. Issues of both race and gender inequality can be integrated and must be integrated and that was the trajectory of how I got to where I am now.

It has led me away from teaching just in a law school and led me to Brandeis, which is a policy school, and it has also led me to my work with the Hollywood Commission to bring gender equity to the workplaces in the entertainment industry.  I feel fortunate to have been able to move through the world in the way that I have and landed where I am.

We are working with not only what is happening on screen but also with workers who work in the industry. Every individual in the industry deserves a safe place to work and a chance to showcase their skills without bias.

CL: I grew up with civil rights activists as parents. Coming to Yale was eye-opening. It was shocking to me that my professors were so supportive and so driven in social justice work...  my professors were prepared to mold us in that tradition of working towards gender equity. I started my time in law school after watching [the Anita Hill hearings], and, [Anita,] you spoke what I knew to be true because of how you presented it.  You gave me a path in the arguments you crafted that would change our world. I had the benefit of learning from [both of you], from professors who were prepared to mold all of us in that form of leadership, and I had the luxury of Yale which as the law school of “yes” – Yale gave me those tools and taught me how to do it.

AO: We have to get the laws changed to extend the statute of limitations because in so many cases there is very little I can do as a lawyer because of the statute of limitations. We also have to find our voices because I’m finding that even though a lot of women are coming forward about sexual assault and giving their names, they are not naming who did it, so there is still no accountability. That has to change. We are just getting started.

JL: Anita, you spoke out during the Kavanaugh hearings.  Tell us about how that transpired and where we are now.

AH: What troubles me about the Kavanaugh hearings is that the people in power are more concerned about maintaining power than getting to the truth. Those kinds of experiences are happening in almost every setting in corporate America as well as in colleges and universities. It was only in 2014 that universities really became accountable and started to put processes in place [to prevent situations that] had prevented women and men from coming forward for years.

Processes are important in politics or education or the workplace. It’s not just the bad behavior, . . . it’s the processes that maintain and protect the bad behavior. If we don’t look at those systematically and unravel the system that has protected powerful men who have engaged in gender violence, we will pass it along to another generation. We can’t afford it. It is a crisis, [but gender violence] has never been recognized as [a crisis] by the government.

The Kavanaugh hearings, to me, were about exposing not only how badly the Senate made decisions in 1991, they were about showing that the same individuals are still in power and making the same decisions.

We know that men must be making these decisions because they have the power to do so. We should think about different ways to bring men into the conversation.

Men have to talk about their experiences with sexual abuse, too. We can’t make it a woman issue because it will become sexualized. We have to understand the power dynamic, but it’s not about sex, it’s about the ability to use sex to minimize people and abuse people.

JL: What is the path forward? How can we make things better?

AO: The women who come forward go off and do great things. So, we need your voices. Yale has some of the finest women go through its doors – go forth, don’t be fearful. Speak up.  Now, more than ever, we need your voices. The world is out there to be conquered, and you in this room can make it so.

CL: Seizing the moment is so worthwhile. I have been stunned by how much of a difference even small acts can make. In just three years, we have changed the landscape within universities.

AH: I’m going to push back on the idea of retaliation.  It is real.  It is real in the workplace for those who are more vulnerable.  The best way to respond is to think about how to protect the more vulnerable people and how to create the kind of environment where if someone speaks up, we are willing to support that person. You need to speak up for yourself and for those who cannot speak up for themselves.

I invite us to think openly, think boldly, think radically about equality.