Jessica Neuwirth ’82, Harvard JD ’85 has dedicated her career to the advancement of human and women’s rights, from her work as an undergraduate with the Yale chapter of Amnesty International to her leadership of pre-eminent US women’s rights coalitions focused on obtaining ratification of the Equal Rights Amendment (ERA) of the US Constitution.

She has served as the president of ERA Coalition, co-founded international women's rights organization Equality Now and founded Donor Direct Action. Neuwirth has also served the United Nations as Special Advisor to the High Commissioner for Human Rights on Sexual Violence. Since 2018, she has been the Rita E. Hauser Director of the Human Rights Program at the Roosevelt House Public Policy Institute, Hunter College.

Neuwirth sat down with YaleWomen to discuss her work in women’s rights and her first book, Equal Means Equal: Why the Time for an Equal Rights Amendment Is Now. Published in 2015 by The New Press, Equal Means Equal examines the landmark legal cases and discriminatory injustices faced by women in the US that inform the need for an ERA. 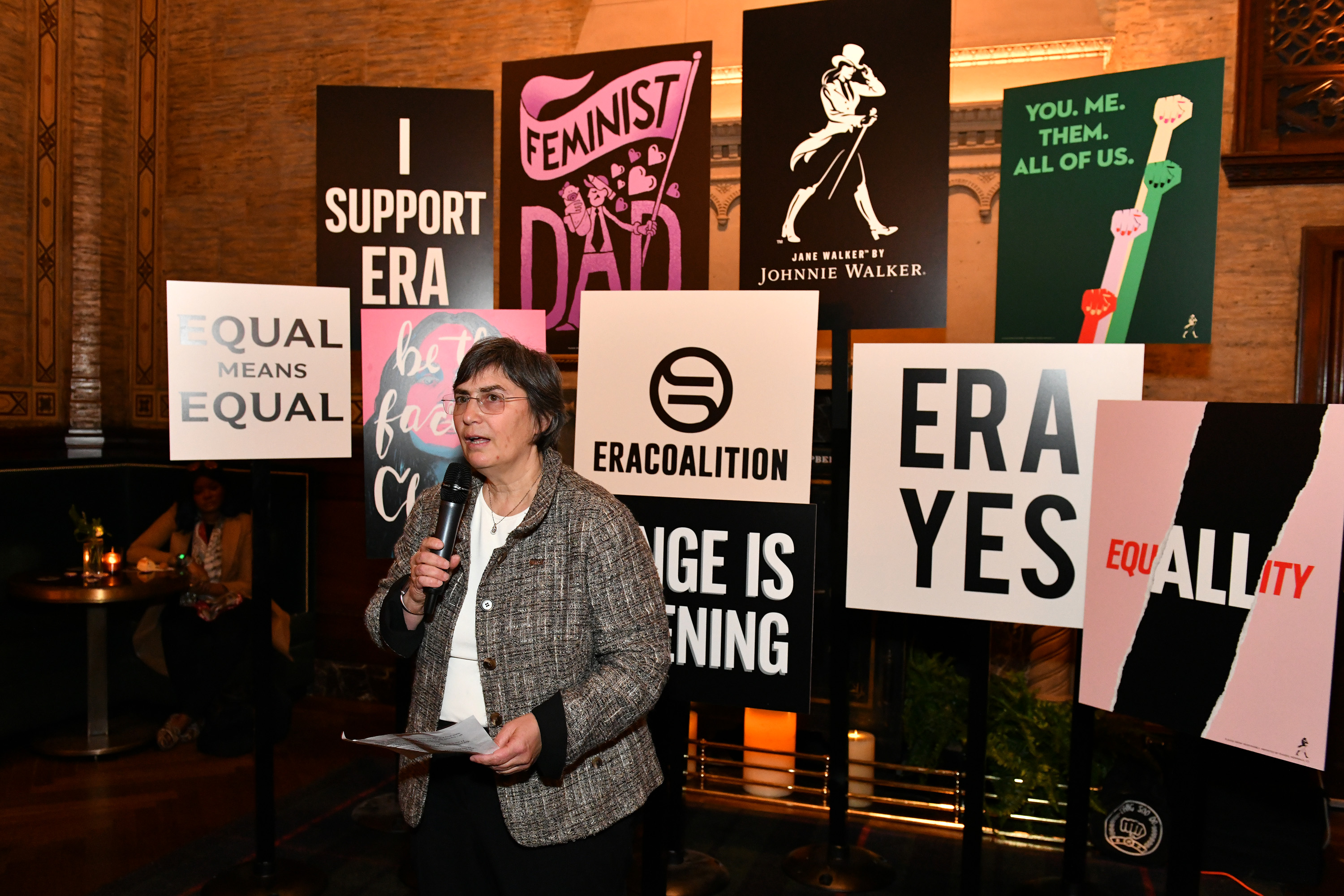 YaleWomen: Jessica, how did your time at Yale influence your decision to pursue a career in human rights, and then in women’s rights?

Jessica Neuwirth: Yale was where I really started to formulate my own thoughts and activities around human rights, and those were very formative years for me. I was pretty active in the Amnesty International chapter at Yale and focused my history thesis on the rise of intolerance and the movements that led to torture in the Middle Ages. After Yale, I went to Harvard Law School to get a legal framework, and jumped right into the human rights movement with Amnesty International after that.

YW: Can you tell us a bit more about your book and why you decided to write it?

JN: I wrote the book to convince people that we need the ERA. I know how important it is for readers to identify with people and their stories. So I found Supreme Court cases that people could identify with--and that showed that women who had been discriminated against had not gotten the justice they deserved through our current legal system.

In pay equity, it was the Walmart case with Betty Dukes, who was the plaintiff in the class-action suit that failed. In pregnancy discrimination, it was the Peggy Young vs UPS case in which UPS was giving drivers with convictions for driving under the influence alternative work until they got their licenses restored, yet failed to give Peggy Young the same right to alternative work during her pregnancy even though she was told by a doctor not to lift a certain number of pounds.

In violence against women, it was the horrendous Jessica Gonzales case in Castle Rock about a woman who tried to protect her children with an order of protection from a court that required mandatory arrest. She couldn't get the police to arrest her former husband, and he kidnapped her children and killed all three of her daughters. Having gone to the police more than a dozen times, she took legal action.

The case went to the Supreme Court and she lost, but when she took her case to the international community through the Inter-American Commission of Human Rights, she won. This was based on language that was similar to the ERA, so again I saw that even though we don’t know exactly how much language like that would immediately help, it’s definitely something we need, as most women definitely are not getting justice.

At a symbolic level beyond these cases, the idea that as a country we don’t have an equal rights guarantee in our constitution for nondiscrimination on the basis of sex - while so many other countries do - makes us an international outlaw. Here we are around the world promoting womens’ rights and rule of law, and we really don’t have either when it comes to equality for women and equality on the basis of sex.

YW: How does the authorship of this book tie into your broader work in women’s rights activism?

JN: I was part of a group that started the ERA coalition, a small nonprofit, and the Fund for Women’s Equality, a sister group, to do education and outreach. The goal of the ERA coalition was to bring together the small groups of people who had been campaigning for the ERA and pool our resources and experience, bringing back the energy of the big groups who played a huge role in the campaign in the 70s.

In 2017, Nevada became the first state to ratify the ERA since the 1970s, due in large part to a state senator Pat Spearman, who I think of as the godmother of this new generation of the campaign. Then Illinois voted to ratify the ERA in 2018, Virginia in 2020 and then three more states had ratified. From a constitutional point of view, we then met both requirements for constitutional amendment.

There is a massive difference from the time we started to now in terms of who has heard of the ERA. Now, young people who thought “we must have it,” who now find out we don’t have it, get outraged, unlike older generations who knew and weren’t that surprised. Younger women who have grown up with feminist parents feel indignant about it, and there’s a lot of young energy for it which has helped a lot.

YW: Tell us more about the process of writing the book.

JN: I’d never written a book before, and undertook to write it in a very short time frame, feeling the pressure of the campaign to get it out. I read through all the cases and was surprised at how little the law protects women. When you read these decisions you see so much misogyny, even in the way that people talk about women. There’s always a mix of law and politics, and what you see in the law historically is a real disregard for women’s rights that is a shadow of the fact that women were intentionally left out of the constitution. That carried over not just in the law but in practice.

On the one hand there are the dry legal texts that take a long time to explain to people, but on the other hand, there’s a raw sense of injustice that was propelled by movements like #MeToo. What #MeToo did in the media for such a short time was exponentially greater than what any legal court had done on sexual harassment for decades.

It is ironic, because the US has always strongly supported women’s rights around the world. That includes countries like Iraq and Afghanistan, where we have successfully helped put pressure on getting them to insert what is essentially the equal rights amendment in their constitutions. So now we have these countries like Iraq and Afghanistan that have an ERA provision in their constitution specifically because of the US. And yet it is so hard to get our own. That hypocrisy doesn’t go unnoticed by the rest of the world.

YW: What would you say to people who currently aren’t acknowledging the likes of pregnancy discrimination and pay equity as serious legal issues?

JN: First of all, the numbers are massive. Women are the majority of the population, so consider how many are pregnant and how many are working at any given time. You have to think, “is it right for a woman who is perfectly capable of working to lose her job because she’s pregnant at a time when she needs the income even more?”

Similarly, gender-based violence numbers are staggering in terms of violence but also death, particularly in a country where guns astronomically increase the rate of death for women. They say 1 in 3 women around the world has been raped or beaten. We all know people whom this has happened to. Do we really want to live in a world where women are second-class citizens, without the protection of the law or equality of the law?

The challenge is to link something like #MeToo to the Constitution. There’s this sense that from the day that the US started as a country, women have been second-class citizens, which has given rise to a culture that makes sexual harassment not only possible but normal. Until you go back to the root cause of a problem, you can’t really solve it. This requires elevating the status of women, and #MeToo is part of elevating that status.

YW: Beyond the ERA, where else are you focused?

Coming from one of the wealthiest countries in the world, we also have a responsibility to women in the rest of the world who don’t have access to the resources and visibility that we have. So in 2013, with Gloria Steinem’s help, I started Donor Direct Action, a project designed to strengthen women’s groups in other parts of the world where fighting for human rights is a much more uphill battle.