In Conversation with Nancy Marx Better ’84, 2019 Recipient of the Yale Medal 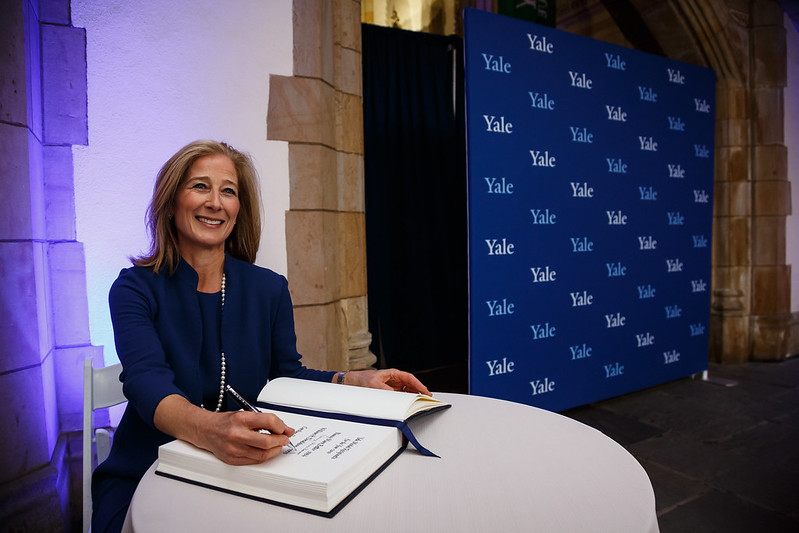 On November 21st, Yale President Peter Salovey ’86 PhD and Yale Alumni Association (YAA) Chair Nancy Stratford ’77 presented the 2019 Yale Medal, YAA’s highest honor, to five recipients during a ceremony in the Lanman Center of Payne Whitney Gymnasium. The first to receive her Medal was Nancy Marx Better ’84. Lisa Beth "LB" Friedman Savitz ’88 sat down with Nancy on October 31st to discuss this honor as well as her long service to Yale and to education in their shared community of Greenwich, CT.

Nancy’s Yale volunteer roles have included Alumni Schools Committee, Class Secretary, Reunion Gift Committees Chair, University Library Council Chair, School of Music Board of Advisors, Yale Development Council, Yale Tomorrow Campaign Committee, Parents Leadership Council, and heading the record-setting Parents Annual Fund. Her community volunteering, which has spanned 25 years, included involvement at all her children’s schools, serving on the boards of two, and the Greenwich Library Board, of which she was President. (My mother, ’65 MAT, was an employee of the Library throughout Nancy’s tenure.) Other local organizations she works with are the Waterside School (Trustee), the Boys and Girls Club (Vice President), and Horizons (Director) — all focused on literacy and educational access. Nancy is a journalist, published in The New York Times, The Wall Street Journal, Fortune, and others. She was a founding editor of SmartMoney magazine, and has been a contributor to several books.

Her path to Yale was possibly set in the 1920s when her great-aunt Emily Marx ’25 LLB enrolled at Yale Law School, which began officially accepting women in 1919. Marx, who was on the editorial board of the precursor to the Law Review,  practiced in New York for a decade before becoming the fifteenth woman accepted to the bar in New Hampshire. It is likely that Emily Marx was one of Yale’s first female Jewish students. She was followed to New Haven by her younger brother, Nancy’s grandfather, who graduated from the Sheffield Scientific School in 1926. Nancy’s father and older brother attended Yale College, and her parents’ first date was for Yale-Harvard weekend. Nancy grew up immersed in Yale culture, dreaming of going herself. She passed her love of the school to her own three children, who all graduated from the College; most recently daughter Sarah received her degree this past May. The family, all Saybrugians, enjoys comparing cross-generational notes about which landmarks and traditions remain unchanged and which experiences diverge, “a dialectic of old and new.” 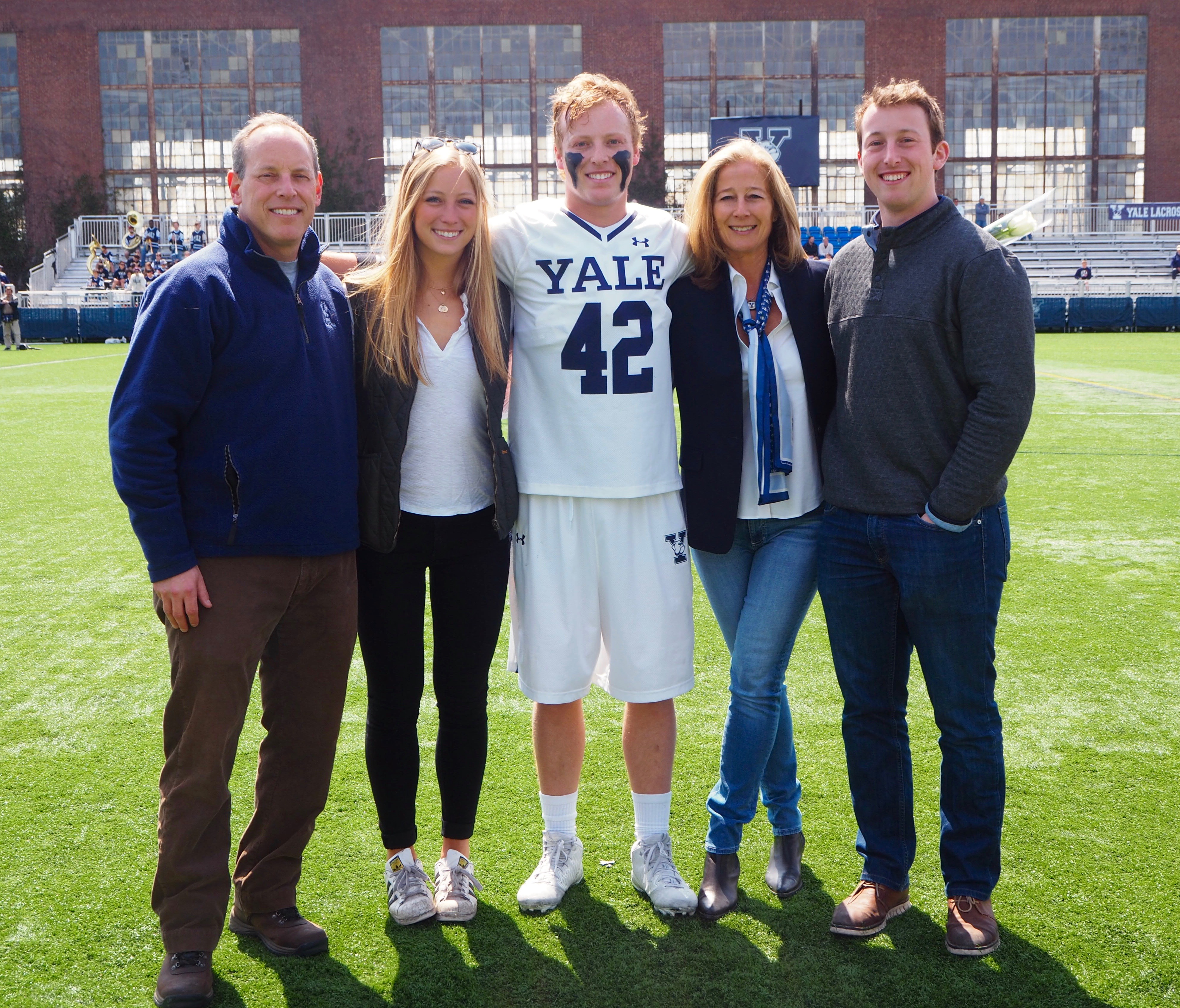 Nancy had some trepidation when her kids followed in her footsteps, in case Yale was not as she remembered, but she was amazed by the progress she saw on campus. In particular, a welcome surprise was the dramatic development of New Haven and its relationship with the University, for which she credits former President Rick Levin ’74 PhD and former Vice President Bruce Alexander ’65. “We were walled off while our children embrace New Haven.”  Watching her children as they had their own Yale experiences gave Nancy an appreciation for the “tremendous complexity of managing a university toward the future while under intense scrutiny.” Seeing Yale through the eyes of the next generation reinforced what was already a profound dedication to her alma mater.

Nancy says “every time Yale called I said ‘yes’” and having started saying yes early, the yeses added up over four decades. The result was a growth of opportunities and leadership roles, with “no negative experiences.” “Volunteering for Yale has always felt like a privilege.”  The roots of her Yale involvements were primarily social. She characterizes the work she does for non-profits as being about “connecting with other people” and “incredibly satisfying.” The value is in being able to advise, support, and engage. “I love all the very different things I do at and for Yale.”

One recognizable theme is literacy and the written word — her “overlapping wheelhouse.” Nancy’s first paid job was at a local independent bookstore, and, like so many of us, she fell in love with the libraries of Yale. She views a library today as going far beyond just a collection of books: it’s a locus of community and a host to a variety of information sources. Supporting Yale’s libraries includes renovation of their physical spaces and the digitization and preservation efforts at West Campus, “from papyrus to floppy disks.”

Perhaps the most outlying of Nancy’s Yale hats is the School of Music Board, which she calls “an amazing opportunity to participate.” Nancy was asked by Dean Robert Blocker to join because her mother Sylvia Marx, a concert pianist, was already a valued member, having joined the Board in 2002. (In discussing both her mother and her husband, Nancy paints them as “naturalized Yalies”: not alums themselves, but having an attachment born from spouses and children attending, and thereby feeling themselves part of the “Yale Alum” family.) At the School of Music, too, Nancy was drawn to the needs of students, supporting the Music in Schools Initiative, a partnership with the New Haven Public Schools. 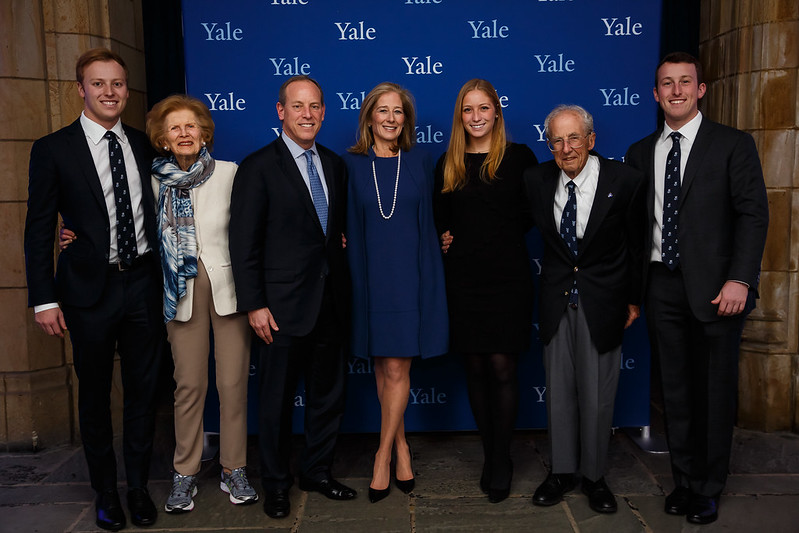 Above: Nancy with her parents, Sylvia and Leonard Marx, her husband, and children. Image courtesy of YAA.

The Marx Better clan is all about following in one another’s footsteps, and true to form, Nancy’s three children are already active alums, realizing the entwined traditions of volunteering and dedication to Yale. When asked about the prevalence of Yale entities among her own service activities, Nancy acknowledges competing priorities but emphasizes Yale’s importance to her family. And more than that, “Yale is a powerful force for good in the world,” one that leverages and multiplies the contributions made to it.

One of Nancy’s favorite roles is discussing with high school students what Yale has to offer. She says “it never gets boring to talk to people about Yale because each one experiences it in a unique way and from their own perspective.” This was certainly true of our conversation, which had ranged at great length before we focused on what was notable about being a woman at Yale, and especially about being a female Yale volunteer.

Nancy noted that as undergrads she and her fellow women classmates were “rarely conscious of how recently women had arrived.” Even being the second female in the family to attend was not unique; Nancy’s Saybrook roommate was one of three sisters attending Yale concurrently. “A few things felt unfair, mainly around the edges, like leadership access.”

That said, Nancy personified the second-wave coeducation moment. She was a freshman counselor, Senior Editor of the Yale Daily News (with Editor-in-Chief Anndee Hochman ’84, who followed the first female YDN EIC Anne Gardiner Perkins ’81), President of the Saybrook College Council (after an intense competition with a male classmate for the position), and the first female recipient of the Mary Casner Award. The Master of Saybrook, Dr. Elisha Atkins, presented Nancy with a citation, which she still has: 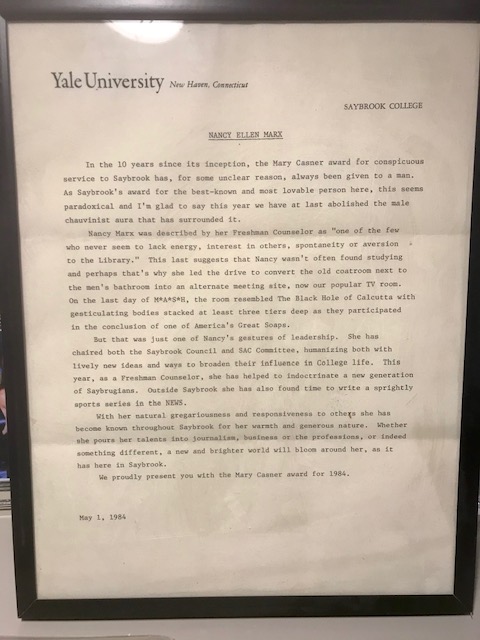 “In the 10 years since its inception, the Mary Casner award for conspicuous service to Saybrook has, for some unclear reason, always been given to a man. As Saybrook’s award for the best-known and most lovable person here, this seems paradoxical and I’m glad to say this year we have at last abolished the male chauvinist aura that has surrounded it.”  The letter concludes, “Whether she pours her talents into journalism, business, or the professions, or indeed something different, a new and brighter world will bloom around her, as it has here in Saybrook.” Somehow Nancy never mentioned this to her children, until the first of them arrived in Saybrook and wanted to know if the NE Marx carved into the common room wall was, perhaps, his mother.

More recently, Nancy was the first woman to chair the Library Council, although for the most part in “my Yale volunteering role” she finds herself frequently working with women and sees women in positions of leadership, whether with development, class activities, YAA, or our local YAA of Greenwich. She finds it “exciting to see my daughter welcomed into this network.” Nancy did take special note that there is a “sisterhood of Yale Medal winners who are all heroes to me” and that they were the very first to congratulate her and offer guidance when the honor was announced. In addition to Nancy Stratford ’77 and Weili Cheng ’77, YAA Executive Director, these included Kathy Edersheim ’87, Melanie Ginter ’78, and Bobbi Mark ’76. In general, Nancy says there has been an “outpouring of excitement and support for this once-in-a-lifetime recognition.” However, in her typical spirit of sharing and generosity she says “there ought to be one hundred medals a year because there are so many people doing extraordinary work on behalf of Yale.” 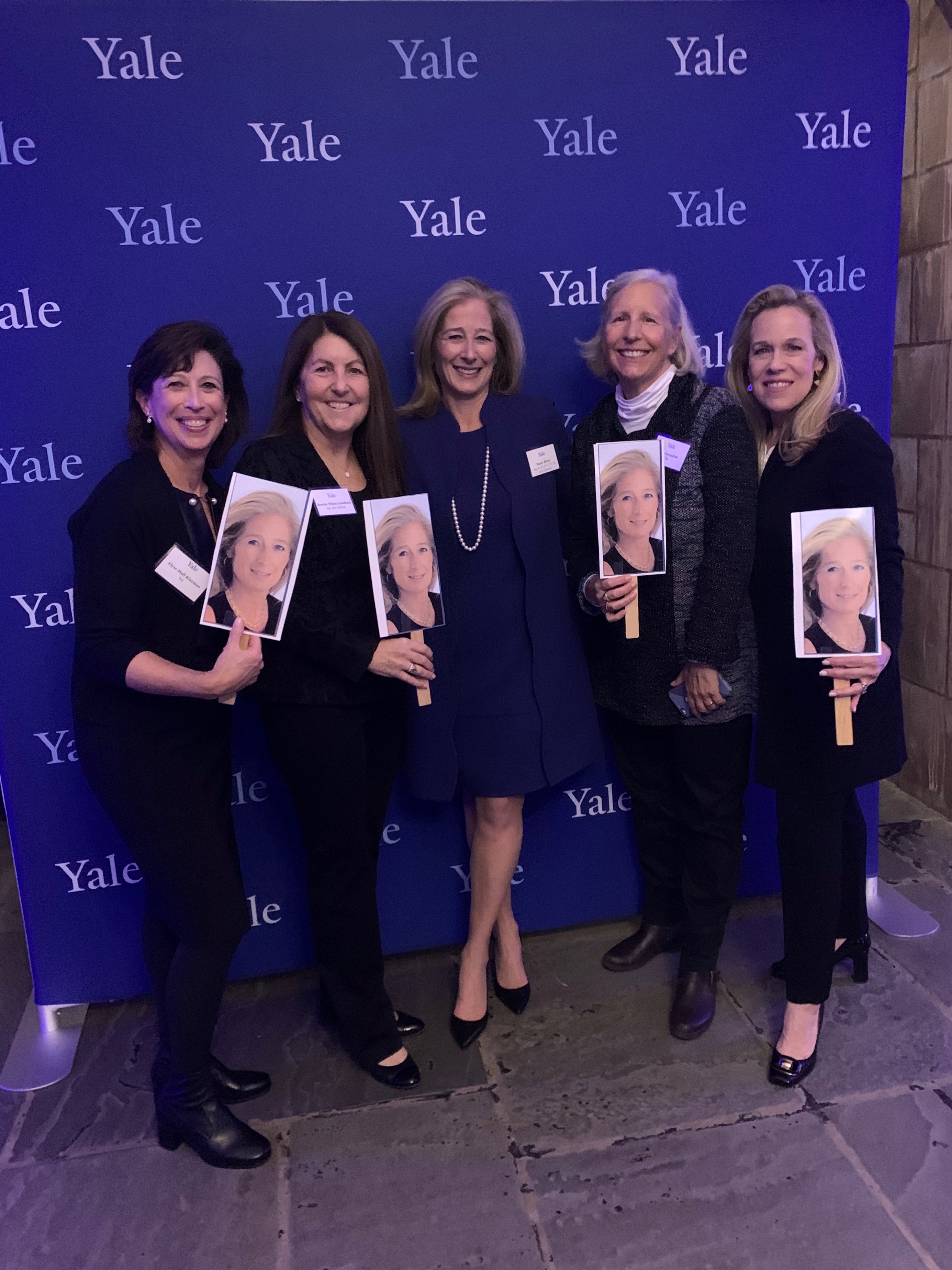 Classmates from 1984 at the Yale Medal dinner. From left to right, Elyse Mall Klayman, Brooke White Sandford, Sara Joan Cavendish, and Elizabeth Hallahan Dempsey, who is a member of the YAA of Greenwich Board of Directors.

— LB Friedman Savitz ’88 is on the YaleWomen Council, is a Delegate At-Large to the YAA Assembly, and is on the YAA of Greenwich Board of Directors, of which she is a past president, among other Yale volunteer roles.