From Hong Kong with Love: Alums Reach Across the Globe During Coronavirus Crisis 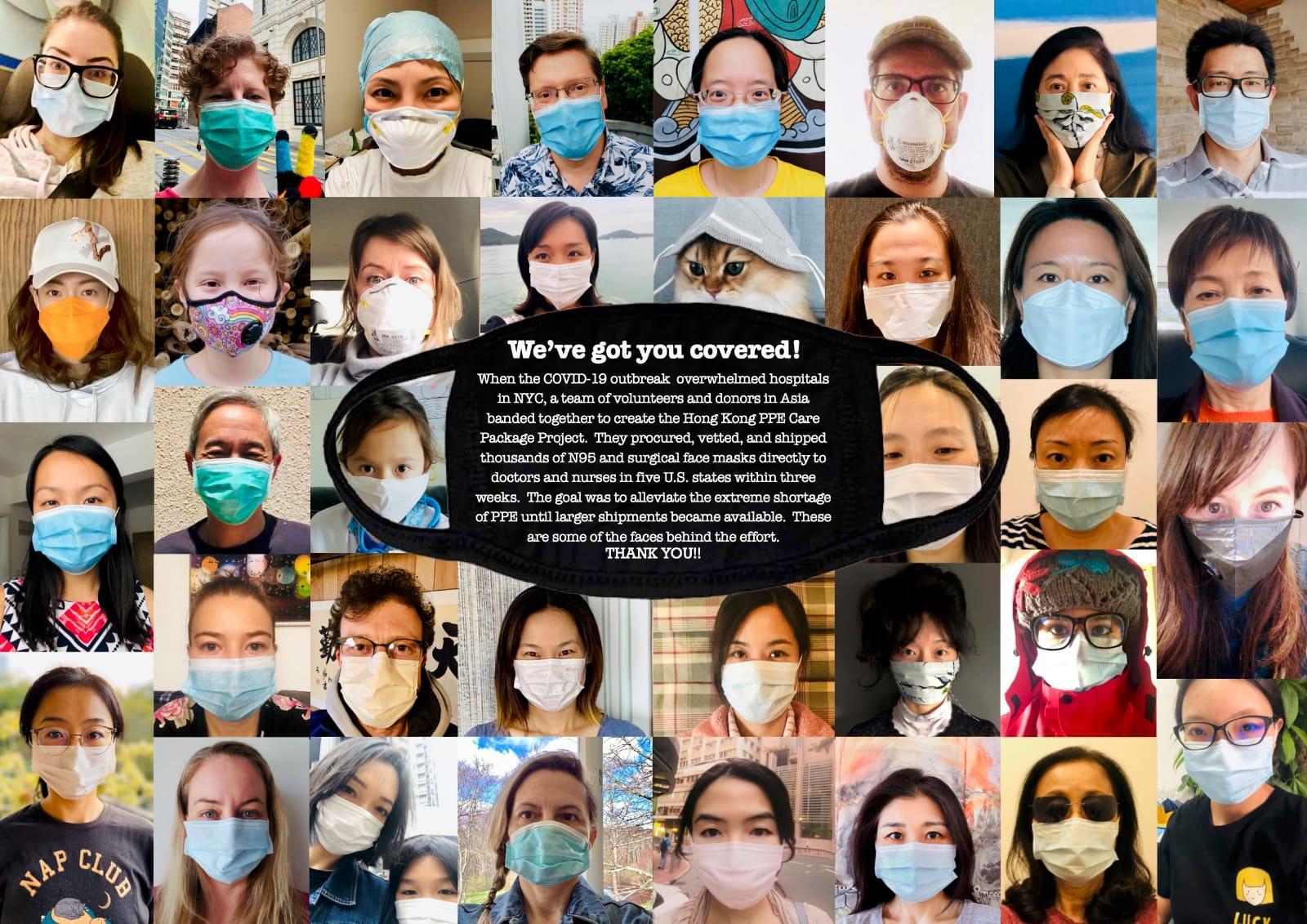 On April 18, 2020, we let out a collective sigh of relief. The last of our 25 care packages had made it safely into the hands of our final medic recipient in New York City. What had started on March 25 as a loosely organized matching service, meant to link American doctors and nurses with individual Hong Kong donors who could ship masks to them, had quickly morphed into a Yale-women-led adventure of collective finding, buying, vetting, and shipping of a lifesaving product made scarce by global disruptions. Little did we know what we were in for!

The panic over COVID-19 and mask shortages since late January in Hong Kong had given us a clear view of what would soon be experienced by people in the United States. Wearing face masks has a long history in Asia. The great Manchurian plague of 1910 gave China’s chief medical officer, Dr. Wu Lian-Teh, the idea of designing inexpensive face masks of gauze folded around cotton to protect against lethal airborne disease. Fast forward to present-day Hong Kong, where donning a mask at the first sign of a virus is seen as an act of social responsibility, especially since the SARS outbreak of 2003. Given that China makes more than half of the world’s supply of masks, we thought to leverage our proximity and cross-border networks to send “care packages” directly to medics at the frontlines of the COVID-19 surge in NYC. This stopgap measure felt like sending band-aids into a war zone, but one made necessary in the absence of a coordinated federal public health response in the U.S. to address the extreme shortage of PPE.

Fine idea, but the practical details of donating masks halfway around the world in the midst of a global crisis turned out to present nearly insurmountable challenges every step of the way. Our WhatsApp group of Yale women alums in Hong Kong, established in 2016, became the primary source of donors and volunteers. Armed with pledges from 22 women donors, Yale alum volunteers drew on their personal and professional networks to source and send thousands of N95 respirators and surgical masks and get them to increasingly desperate doctors and nurses in the U.S. Our first concern was to find trustworthy masks. Our vetting was complicated by the in-flux regulatory landscape in both China and the U.S., in the shadow of trade war tensions. On the U.S. side, the extreme shortage in PPE led the Food and Drug Administration to issue a succession of conflicting guidelines on what types of masks from China were authorized for medical use, accompanied by increasingly unpredictable customs checks on incoming masks. On the China side, more onerous restrictions on exporting PPE were being put into place as an attempt to protect against international criticism and masks made by unproven manufacturers. The resulting uproar in international politics was mirrored in our own group with repeated panics, upended plans, and scrambles for workarounds — all while trying to balance work and home demands (with schools suspended since February 3) and stringent infection control measures in Hong Kong -- leading to jokes about our not-for-prime-time TV drama. It was a call for celebration every time a box of masks made it through our own vetting, three sets of borders, and a tangle of disrupted shipping paths to the doorstep of a medic.

We ultimately had to become experts ourselves in deciphering the standards of Chinese and American PPE, drawing on our bilingual language abilities and freedom to use multiple social media platforms to connect volunteers, suppliers, procurers, and shippers across the “Great Firewall.” The care package project we described here is but one of several PPE initiatives by Yale women alums in Asia. None of us could do much on our own. But our YaleWomen Hong Kong group had already brought us together under an umbrella of trust, enabling a collective of like-minded and action-oriented Yale alums and friends to pool together our networks and resources in order to make a meaningful difference. As one of our medic recipients told us: “Efforts like these go a long way during these times. It is particularly heartwarming to see Yalies pull together across the globe.” During this time of crisis, we may feel helpless alone, but together we can do a lot!