For God, for Country, and for Yale: A Recent Grad’s Reflections on Her Undergraduate Experience as an Air Force ROTC Cadet 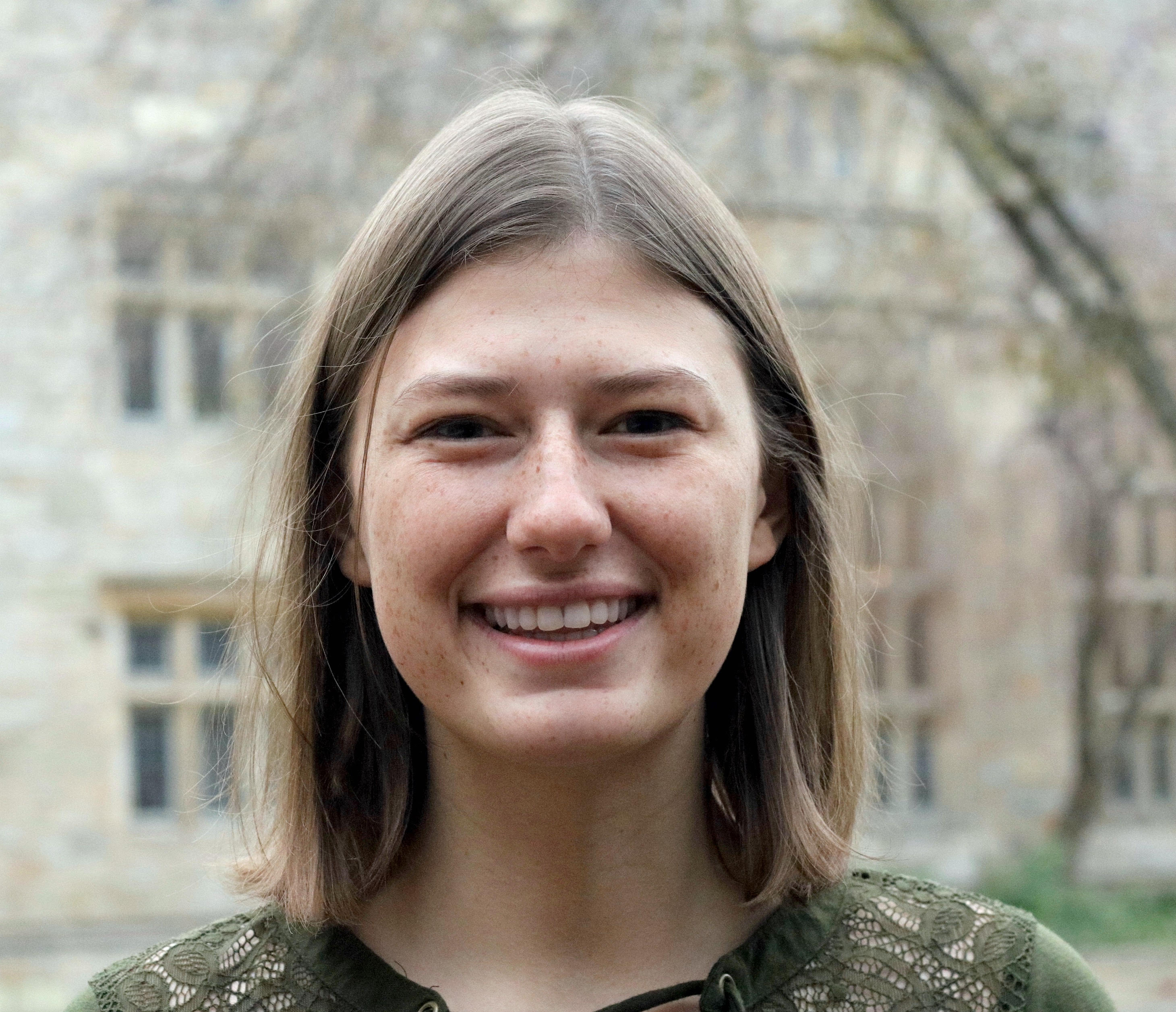 One of the truly beautiful things about the Yale experience is that it affords students of diverse backgrounds and interests the opportunity to fully express and realize their dreams. ROTC returned to the Yale campus in the fall of 2012, and Juliette Dietz ’19 – daughter of current YaleWomen secretary and soon-to-be vice-chair Sue Pepin ’87 – very graciously shared her reflections on her undergraduate experience as an Air Force ROTC cadet. Thank you, Juliette, for sharing your unique perspective as a woman undergrad and woman ROTC cadet! And thank you for your service!

What inspired your decision to attend Yale as an Air Force ROTC cadet?  (I know you're a third-generation Air Force officer, so I'm sure your family's service had a lot to do with your decision!)

A: My dad and grandad were both in the Air Force in Australia, so I grew up listening to my dad's stories about the funny and wacky things he got up to back in the day. He would talk about being put in charge of experts twice his age at 21, of getting to fly in fighter jets as an engineer, of the pranks he and his buddies pulled on each other at training. I also grew up hearing about my mom’s time at Yale, where she took every class she laid eyes on and graduated with 52 credits. I am not sure when exactly the idea of joining the Air Force took hold in my mind, but by the time the summer before senior year of high school rolled around I knew I wanted to apply. The idea of service, of giving back to my country, of following in the footsteps of the incredible people who have served, and of adding a little bit of adventure to the looming concept of a liberal arts education all appealed to me. I also knew that, while I was heavily considering the Air Force Academy, Yale was my dream school. I applied to both ROTC and Yale, and when the two overlapped and I had the option to do Air Force ROTC at Yale, my decision was clear.

A: My first experience with the ROTC detachment at Yale (Det 009) was during Bulldog Days in 2015. I remember feeling very nervous (it was my first real encounter with the U.S. military, which I had somehow decided to join) not just about meeting some of the people I would spend four years with but also about seeing what I had gotten myself into. Immediately I was told, by students and cadre, that ROTC would not consume my life. The Air Force had specifically decided to send me and my fellow cadets to get a Yale education; why would they then make us spend all of our time at Yale doing ROTC? This point proved very true over the course of the next four years. We did, of course, spend a lot of time on ROTC. We were up by 5:30 am twice a week to work out in the Lanman Center, and on Thursdays, we followed our workouts with two hours of leadership exercises and training, followed then by our Aerospace Studies classes. We often had events to fill our free time, from trips to nearby bases to barbecues and football games with the Veterans Association to volunteer projects at local shelters. However, added up, the time we spent doing ROTC never exceeded the time that other students spent doing their extracurriculars. There are ROTC cadets who are also varsity athletes, cadets who are in a capella groups and dance groups, cadets who are FroCos and college aides. I consider my fellow ROTC cadets to be some of my best friends today, those life-long friends from college everyone always talks about, and I made them doing what I love at Yale just like every other Yalie does. The fact that my extracurricular forced me to learn the skill of easily waking up early is just an added perk.

How did the Yale community respond to you, as an ROTC cadet, and as a woman cadet?

A: The Yale community in my experience has been very welcoming of and receptive to our ROTC detachment. The campus is actually quite rich in military history if you know where to look - from Hewitt Quadrangle, which centers around the Yale Alumni War Memorial, to Woolsey Hall’s dedications to Yale veterans reaching back to the Revolutionary War, to the statue of Nathan Hale that stands outside of his old dorm room on Old Campus. On the walls of our detachment are photographs of soldiers marching through Phelps gate and doing exercises in the Branford courtyard during the lead-up to World War II, when Yale opened many of its campus spaces to the military. Walking around and seeing those constant reminders of Yale’s longstanding commitment to military service has always made me feel that being a part of ROTC at Yale made me a part of a proud and longstanding legacy rather than someone who was out of place or unwelcome. The only time I felt that being a part of ROTC made me different from other students was on Thursdays, when we wore our uniforms all day to our classes. As a political science major, my classes often involved heated discussions of the past and present actions of the U.S. military, and of course sitting there in uniform changed the dynamic of how I felt and was perceived in those discussions. However, ROTC official rules make it clear that we have academic freedom in settings such as that, and we are able to participate fully with our own opinions. I was never personally attacked or questioned about my involvement with the military in any academic settings, and walking around campus I received nothing but friendliness from fellow students.

If you encountered any skepticism - I'm hoping you didn't - how did you respond?

A: I am very happy to say that I have received very little skepticism for joining the military, and I know that I am able to say that thanks to the constant support and respect of the Yale community. My interactions with the cadre, fellow classmates, professors and the administration have been overwhelmingly dignified and centered on a fundamental desire for equal treatment. Of course, being a woman in a male-dominated field always comes with many challenges and obstacles, but the strong and close cohort of female cadets, as well as supportive female cadre and classmates, has for me always overpowered the setbacks. Unfortunately, my experience, particularly outside of the Yale community, is sometimes less than encouraging. I have been told I “seem too sensitive” to be in the military, that women-free units are much more fun because they “can say anything”, and I was asked just this past May if I didn’t wish I could be wearing a dress instead of my uniform at our formal Dining Out event at the end of the year. What was my response? I became a second lieutenant in the world’s greatest Air Force.

How, in your opinion, does Yale benefit from having ROTC (back) on campus?

A: Yale is an institution that prides itself on its diversity as well as its commitment to service in all its forms. Neither of those key aspects of the Yale community would be complete without the military. I do not hold many opinions that are often seen as typical for military members, and I grew up in a small college town that did not really think about the military at all beyond vague opinions in support of pacifism. But for me, that hasn’t led me to want to avoid the military or criticize it from the sidelines, it has led me to want to take on the challenge, to do what I can to make change. If people want to change the way that the military is operated, they need to get involved, not turn their backs. Ultimately, Yale and Air Force ROTC have the same mission: to build leaders. I think allowing people who will go on to serve in the United States military to have access to a Yale education, to have their views challenged and to challenge the views of Yalies who will go on to other professions, as well as to form lifelong friendships with Yalies from all over the world, is an incredible advantage to both the ROTC and non-ROTC students as well as to the future of the university and of the U.S. military.

How, in your opinion, does the military benefit from having women in leadership roles?

A: I will answer the women in leadership question by giving you a quote that every cadet in the Air Force had to memorize this year as part of learning our ‘Warrior Knowledge’: “Gender, race, religion, none of that matters. What matters is how you perform.” — Brigadier General Jeannie M. Leavitt, USAF, the first U.S. female fighter pilot. Excellence comes from everywhere and everyone. If an institution limits who it allows to do certain things, it is only limiting its own potential for excellence. But it is not enough to just say this - increasing the diversity of leadership is the way to truly increase diversity and tolerance. If a young girl can look at the Air Force and see women leaders, women warriors, women entrepreneurs, she will be able to see herself becoming one as well, and then as she fights her way through resistance to her dreams, the women at the top can reach down through policies, through guidance, through example, to help her up.

What did you study, and what other activities did you participate in, at Yale?

A: I studied Political Science, particularly focusing on different forms of political collective action. My thesis examined how women perceive themselves as a politically significant group and how their gendered identity informs their political opinions, seeking a better understanding of how and why women might engage in collective action. In addition to ROTC, one of the most rewarding activities I participated in at Yale was FOOT (First-Year Outdoor Orientation Trips) where I got to lead small groups of incoming first-years on hiking trips every fall. I was also a part of RALY (the Reproductive Justice Action League at Yale), a women-led group that focuses on reproductive justice activism on campus and in Connecticut, as well as RISE (Refugee and Immigrant Student Education), a group that reaches out to the refugee and immigrant community in New Haven to help families adjust to the city through tutoring and community events. I also volunteered with the local organization New Haven Reads, tutoring young students to help them reach their recommended level of reading comprehension.

What are your plans for the future?  Where and how will you serve?

A: I will start my Air Force service this September at Goodfellow Air Force Base in Texas, where I will enter training to become an Intelligence Officer.

A: I also want to add that I am of course not an official spokesperson for the Air Force or U.S. government in any way - all of this is just my own experience and opinions.