From Privilege to Activism: Sophie Ascheim ’22 Wins Oscar and Fights for Menstrual Equity

Can you change the world in 26 minutes? Sophie Ascheim ’22 did just that, by co-executive producing an Oscar-winning film: “Period. End of Sentence.” This short documentary, less than a half-hour in length, has nevertheless brought global attention to menstrual inequity – the inaccessibility of clean menstrual supplies for many women and girls. The film’s message, though, is one of hope and empowerment. As women in a poor Indian village use a machine to make clean menstrual pads, which they then sell, they decrease the stigma around menstruation and increase their opportunities for income, education, and greater participation in family and civic life. 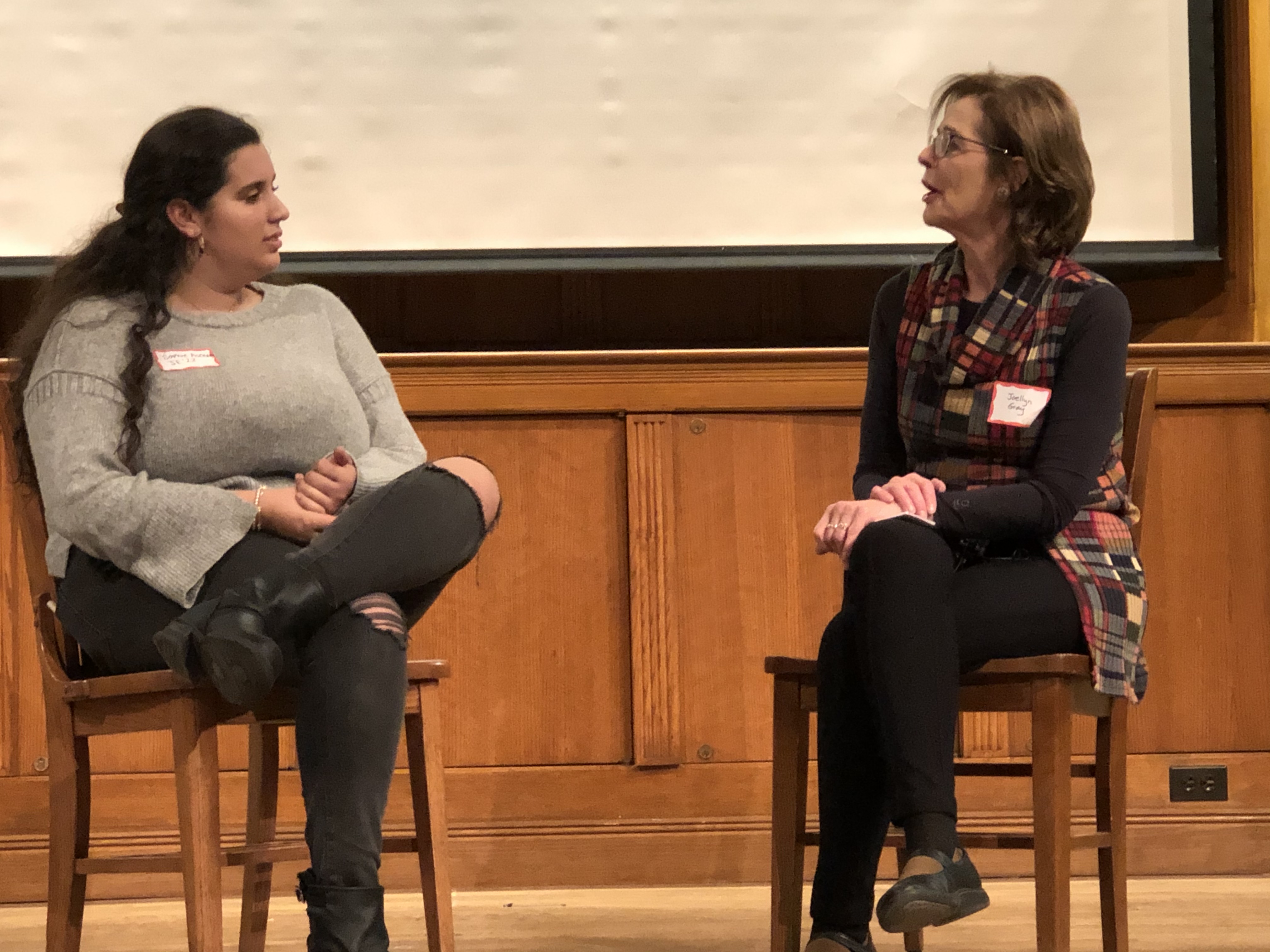 Above: Sophie Ascheim ’22 talks about her activism with Joellyn Gray ’81 MBA at a YaleWomen Connecticut event in November. After viewing Sophie’s Oscar-winning documentary, “Period. End of Sentence,” and participating in a Q&A with her, attendees packed kits of menstrual supplies that were donated to a New Haven agency. The event was co-sponsored by 1stGenYale, the Yale Alumni Nonprofit Alliance (YANA) New England chapter, the Yale School of Nursing Alumni Association, and the Yale School of Public Health Alumni Association.

At a recent YaleWomen Connecticut event, Sophie related how making the documentary—and winning the Oscar—changed her world as well. After growing up in a self-described “bubble of privilege” just outside Los Angeles, Sophie has become a social justice activist and co-founder of The Pad Project, a nonprofit dedicated to funding pad-making machines in communities in Asia and Africa. What has brought her along on this journey? Being mentored by adults close to her, listening, collaborating, and building partnerships—and doing some frantic late-night internet searches.

Sophie’s journey began when her high school English teacher, Melissa Berton, told her about period inequity in India and around the world—and about one solution: a machine invented by a man in India to make menstrual pads from locally sourced materials. With Berton’s mentorship (“our North Star,” who “managed everything that high schoolers couldn’t”) and the inspiration and guidance of her parents (who allowed Sophie to “strike out on my own on this”), Sophie—along with her friends—were emboldened to act and to dream big. They set up The Pad Project, completed two Kickstarter campaigns and partnered with an NGO in India. In 2017, the group was able to purchase a machine and a year’s worth of supplies and to set up local pad-making entrepreneurs in a rural Indian village, Kathikhera.

After the filmmaker Rayka Zehtabchi agreed to film the village residents and their entrepreneurial venture, Sophie, her friends, and their teacher soon had a documentary that they began entering in film festivals. When it was nominated for, and then won, an Oscar this past February, menstrual inequity was no longer in the shadows. Inquiries poured in. To date, The Pad Project has received requests from over 94 countries, as well as from a number of U.S. states, and has funded five more machines.

Sophie laughs as she recalls searching the internet to find out how to run a nonprofit that suddenly had many more requests than resources to handle them. But the nonprofit work—now done in part by volunteer experts in the greater Los Angeles area, some of whom the students’ parents know—goes beyond managerial and fundraising details. For Sophie, the key to success lies in collaboration. “When communities approach us,” she says, “we will listen as if we have never launched a program. Every community will have different needs and specifications, and it would be foolhardy for us to think we know best without living their reality.” For example, clean water is in short supply in Kathikhera, so the menstrual supplies are biodegradable pads, not washable and reusable napkins or cups. Finding that out is possible only if “our ears are always open,” Sophie says, and only if she and her friends—“a group of privileged young women working in a space and breaking down barriers we ourselves have not experienced”—continue to educate themselves. They must, she says, acknowledge “that there are implications of colonization and imperialism that we cannot pretend do not exist just because we do not like them.”

Sophie also listens to “people who have engaged with the documentary” and to women and girls who share their experiences with menstruation. These conversations keep her motivated, as does her conviction that “menstrual equity is usually just one symptom of more devastating inequity.” As she says, “we cannot move towards true gender equity until we address period poverty, the gender gap in education, transphobia, classism, and racism. Each of these feeds into each other, and you have to start somewhere.”

At Yale Sophie has chosen to do that by being on the executive board of [email protected], a chapter of the national nonprofit PERIOD. The chapter packs kits of menstrual supplies for Loaves and Fishes, a New Haven food pantry and clothing closet. And it has another collaboration in the works with the Yale School of Nursing, which is starting a free clinic on the New Haven Green after Sunday church services. As patrons get a basic health checkup, the student members of [email protected] will be there to hand out free period packs.

Despite a resume that includes founding a nonprofit and winning an Oscar, Sophie emphasizes that she is not exceptional: other young women can become activists as well. “Find an issue that you truly care about, to the point that discussing it makes you invigorated, angry, happy, frustrated,” she advises others. Most important, though, is developing the skill of listening. “Using one’s privilege to do good is great, but not if you are talking over marginalized voices—so listen to what they need, and then plan your next steps.” For Sophie, who describes herself as “one of the biggest policy/politics junkies around,” those steps include closely following the events in Washington and the upcoming presidential campaign while also continuing to empower girls around the world. As she notes, echoing the documentary, “A period should end a sentence, not a girl’s education.”

Links to articles and websites for more information: