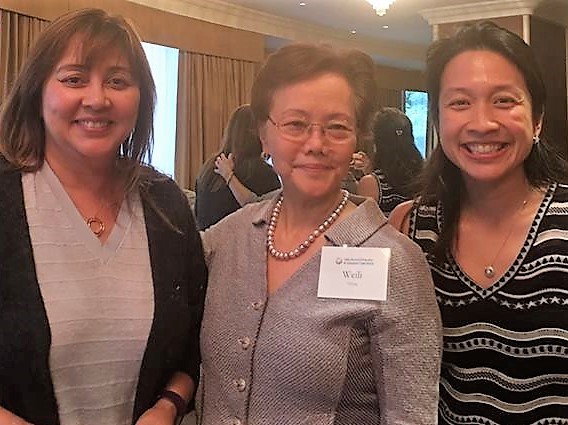 Many women alums don’t realize that YaleWomen has chapters outside the United States, but we do! We currently have chapters in China, France, Hong Kong, London, and Ontario!

Karen Go ’99 is one of the founders of YaleWomen London.  She recently shared its “origin story” as well as details about past and upcoming activities.

Q: What inspired you to found YaleWomen London?

A: Several years ago, I attended a European leadership event that AYA hosted in Rome. Mark Dollhopf, then the executive director of AYA, talked about how alums could make a real difference in connecting alums by volunteering their time with Yale. I talked with other alums who had carved out a little space for Yale alums to come together in their respective countries. Some were small groups – three or four alums – who sometimes got together. Others – like London – would engage larger groups of 50 to 60 alums. This inspired me! I returned home to London to see how I could become more involved. I’d been working with the Yale Club of London in a variety of capacities, including interviewing. Clearly there was a need for a YaleWomen chapter! It just needed someone to take the lead. The Yale Club of London gave its full support, and I talked with other volunteer leaders both in London and when I was back in New Haven for Assembly and my 15th Reunion. We hosted our event about 4 years ago – a social event at the home of Renata Cesar ’79 (Renata developed and chairs the Yale International Alliance, which – like YaleWomen – is an AYA Shared Interest Group). More than 90 Yale women alums attended! This confirmed that there was certainly a desire and an unfulfilled need to create a women’s network.

Q: What type or range of events does YaleWomen London typically host?

A: Like many YaleWomen chapters, we host a variety of events, some small and some large, including an annual social at Renata’s home. One of our signature events is a book group that has met monthly for almost two years – we try to introduce Yale writers into the mix of books. We’ve hosted alum leaders, including Weili Cheng ’77, executive director of AYA, when she visited London. When Joan O’Meara Winant ’73 (one of the YaleWomen NYC chapter heads) and Patti Russo, executive director of the Women’s Campaign School at Yale were en route to Oxford, we were able to host them in a robust discussion about women in politics – it’s a universal issue!

Q: Are there other ways, beyond what's posted on the calendar of the YaleWomen website, for alums to reach you and learn more about your events, e.g., a Facebook page?

A: Watch the calendar on the YaleWomen website for information a social event we will host in October – at Renata’s home – that will highlight Women’s Wellness and will feature Victoria Stainsby ’87 and Justine Lutterodt ’01.

Thank you to Karen and our other international chapter leaders for taking the lead in building a vibrant community of international women alums!