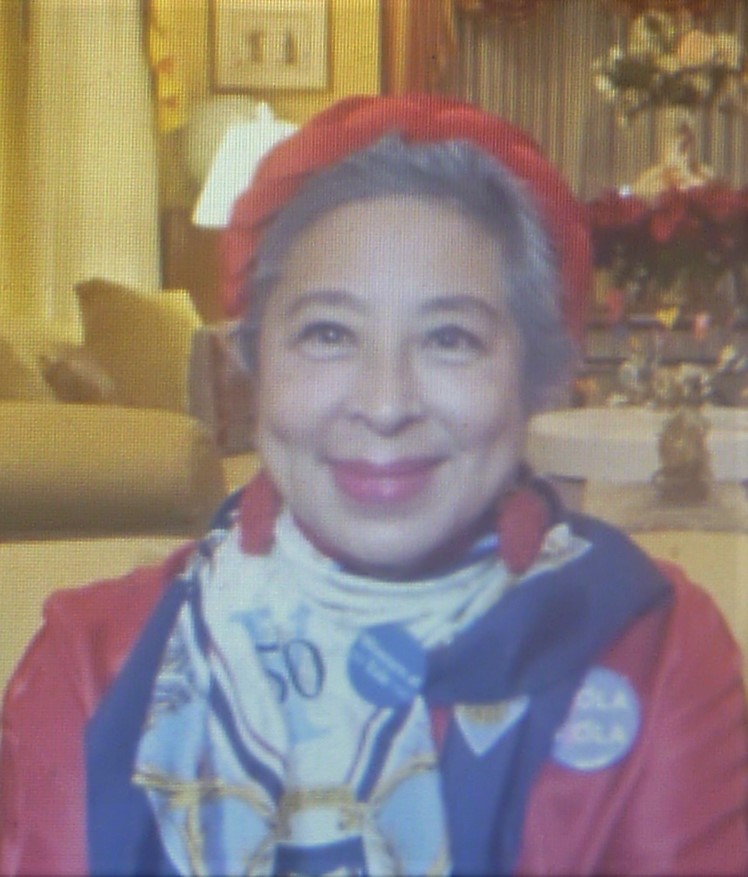 The tributes were laced throughout the closing segment of the December 8 (Virtual) Yale Medal Celebration, which focused on Alice, resplendent in red, and wearing the silk scarf commemorating the September, 2019 50th Anniversary Celebration of Women in Yale College, as well as a prominent blue “Boola Boola” pin with the symbol for female under the “oo.”

“By honoring Alice Young with the Yale Medal, Yale University will commemorate a turning point in the University’s history (the beginning of the equalization of race, gender, and socio-economic background in admissions) and salute one of the very best examples of a Yale graduate.”

“Alice’s greatest gift to Yale is a true willingness to put others ahead of herself.”

And the closing tribute, accompanying the virtual medal presentation:

“One of the first women in Yale College, you have made a lasting impact as a trailblazer and a groundbreaker. You have paved the way for countless students and a more inclusive and open Yale. You arrived in New Haven as one of the few women on campus, and just one of nine Asian Americans in your class.  You quickly set out to rectify both disparities. You co-founded the Asian-American Students Alliance and worked diligently to bring more Asian students to Yale, and to recruit future students from your home state of Hawaii.  After graduation, you transitioned from activist to advocate, serving as a frequent campus speaker, and encouraging Yale women and minorities to dream big.  In addition, you remained active with and played a key role for women in Yale College, and served as an indispensable member of the Yale Alumni Task Force on Diversity, Equity, and Inclusion. Through your many roles, you have distinguished yourself as one of Yale’s most durable and trusted voices, an inspiration to all those fortunate to experience your leadership and your grace.  For your dedication to the Yale community and your passion for strengthening the alumni experience for all, we present you with our greatest honor, the Yale medal.”

In her own words, expressed during the ceremony as excerpts from a videotaped interview, Alice explained what Yale has meant to her: “I think that first and foremost, Yale gave me a sense of being able to explore my identity. Yale was this comforting environment where I could be myself. A group of us formed the Yale Asian-American Student Association, the first such association in the Ivy League. We started talking with the Admissions Committee about how there were so few Asian Americans, especially from public schools. So we started recruiting for Yale, opening up to me a whole new world of mentoring, of encouraging Yale to have a broader base of students.”

“Yale gave me a sense of self-confidence: that if you thought about things, if you had an action plan, and if you talked to people, you could actually get things done! You could do something different, you could make a difference. So, I felt as if I was able to forge an identity, and also began this process of mentoring that really has continued throughout my life. To this day. I still have my Yale connections, the continuing ones as a fellow of Davenport College, of being involved in diversity initiatives, in speaking with students about careers. There is this ongoing connection with Yale, a sense of camraderie, of closeness, of family, where people accept you as you are. A Yale education is invaluable, and I want as many students as possible to have that opportunity—which includes financial aid, and bringing diversity in so many different respects. I’m hoping that as an alum, I can bring some of the tools and what I have learned—both successes and failures—to help students figure out how they can position themselves in the world to make a difference, even in a small way.”

As inspiring as her leadership across many roles at and beyond Yale is the story of the adversity Alice faced and overcame with resilience and adaptability to enable her to come to Yale in the first place. The eldest daughter in an Asian immigrant family, her mother died when she was not even seven years old. Her father, Prof. John Young, born in China and raised in Japan, was a history and linguistics professor at various universities including the University of Hawaii. Every night at dinner, he would ask, “So what did you do today that made a difference?” Life was hard, however, and the family moved from DC to Maryland to Virginia to Tokyo to Honolulu, with Alice attending 13 different schools growing up. As she described in the Class of 1971 40th reunion book: “I graduated from Kalani High School, a public high school in Honolulu that sent only half of its graduates to college, and as far as I know, had never sent anyone to Yale. When I asked my school guidance counselor about colleges on the East Coast, his simple advice was ‘da kine Mainland too cold!’ I arrived on the Yale campus in the fall of 1969 as a twice-transferred student, first from the University of Hawaii, where tuition was at the bargain price of $200 per year, and then from Georgetown University, where as a sophomore scholarship student I tried hard to fit in despite being a non-Catholic, a non-white, a commuter and a woman at a then-predominantly male college.”

When Alice learned that Yale and Princeton were accepting applications from women, she applied and was accepted by both. She decided to go to Yale because of its strong East Asian Studies program. After a few weeks at Yale, she discovered that she was “not just another Yalie, but some exotic species—both as a woman and an Asian American.” She became the Dean’s Aide and later the Master’s Aide in Davenport, and periodically was asked to be a student greeter at alumni receptions to allay alumni fears about the changes in undergraduate admissions.  As she began to identify more with her Asian-American heritage, she increasingly questioned the way Asians had been historically treated in the US. “I felt that for Yale to become a more diverse university, it needed to attract more Asian Americans and women,” and so she co-founded the Asian American Students Alliance, which continues to thrive up to the present. She lobbied the Admissions Office to appoint Asian American minority recruiters, and with a small Yale stipend, travelled to Hawaii to find and encourage Asian- American and female public school students to come to Yale. Pursuing her intention to major in East Asian Studies, she won a Bates Fellowship to study in Japan under Yasunari Kawabata, the first Japanese to win the Nobel Prize in Literature (Alice speaks fluent Japanese, as well as Chinese, French, and English).

Describing her post-Yale career, Alice wrote, “As Yale women, we had been conditioned to break gender barriers and to expect gender equality, so in many ways it made it easier for us to continue to break other barriers for women and for minorities.” She received her JD degree in the first class at Harvard Law School that admitted 10% women, where she was one of the few minority women. Some of her experiences in building a successful and adventurous 45-year international corporate law career specializing in Asia (while coping with a challenging work environment, sexism and racism, salary inequities and juggling of career and family), and those of several other women from that Harvard Law School class of 1974 ten years after graduation, are described in a book, Where They Are Now: The Story of the Women of Harvard Law 1974 (NY: Doubleday, 1986) by Jill Abramson, former executive editor of The New York Times. In her 50th Reunion essay, Alice wrote, “Yale gifted me with so much—confidence, lifelong friends and love of learning, and skills of advocacy, negotiation, consensus-building, and surviving in a man’s world.” These skills not only created successful business and cultural bridges with Asia, but also allowed her to assist and represent creative entrepreneurs, artists, and writers. She mentored over 1000 women and minorities, worked on diversity and inclusion, joined corporate boards, lectured at career and business forums, keynoted the Yale Beijing “ShePower” Summit and the 50th Anniversary of AASA and of Co-education, and serves as a Davenport Associate Fellow.

All along, however, Alice wrote, she was also determined to have a family life: “marriage to Tom Shortall ’72, my two wonderful children, Amanda (Resident Culture Brewing Co. Co-Founder in Charlotte, NC) and Stephen (behavioral health consultant in LA), and my two granddaughters.” Now in “semi-retirement” (which would still tire out lesser mortals) from serving as Chair of the Asia Law Practice at major law firms, Alice consults on Asia strategy, gives lectures on Zoom, and has become an expert on cooking nutritious yet creatively tasty food. She continues to “follow her passions,” making a difference as Lifetime Trustee of the Aspen Institute and The Asia Foundation, and a member of other non- profits such as the Committee of 100, Council on Foreign Relations, ASCEND Pinnacle, Museum of Chinese in America and Lotus Circle, many of which share a theme of women and minority leadership.  Alice remains dedicated to mentoring and paving the way for women and minorities to take leadership positions and serve on the boards of organizations.  “Once you have a seat at the table,” she explained, “you can’t just sit.”